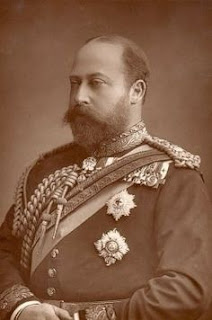 “The King recently heard of her power and during his visit to Chatsworth summoned her to soothe the pain in his injured foot, which the surgeons have had in hand since his accident while shooting a couple of months ago.”

LONDON, Feb. 3.—A well-known American woman here, whose husband managed to go through all his money and hers, suddenly discovered that she possesses remarkable healing powers and has been turning her gift to account. If she continues to succeed as she has done in the last few weeks, she will soon find herself rich again, for society patients pour in upon her. The King recently heard of her power and during his visit to Chatsworth summoned her to soothe the pain in his injured foot, which the surgeons have had in hand since his accident while shooting a couple of months ago.

It was the Duchess of Devonshire who told his Majesty of the woman's powers, her Grace herself having made a wonderful “cure” from neuritis through the healer's machinations. A short time ago, the friends of the Duchess had an idea that her days were numbered, owing to an acute attack of that painful disease. One fine morning, however, to the amazement of every one, it was discovered that she was well. The doctors were staggered and regarded the transformation as a mystery. The patient, being a wise woman of her generation, kept the secret of her “cure,” knowing full well what a deadly thing it is to offend medical etiquette, and one of her physicians was in the King's household.

A great scientist who has examined the hands of the healer says they are charged with something akin to radium, so much so that if one of the palms is placed too long upon a patient's skin it singes it slightly. She is regarded as a phenomenon and is arousing immense interest in medical and scientific circles, but as she has been a well-known society woman she is endeavoring to keep her name a secret. – San Francisco Call, 1904