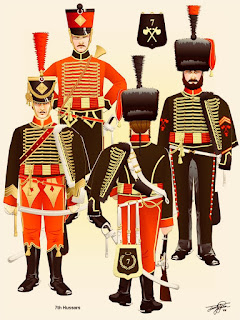 “The Chamberlain tells him when to advance and when to retreat, and the Emperor is so gracious that, expecting to be frightened out of his senses, he is most happy to find that good manners are the same everywhere, in palace and in cottage, with the prince and the peasant.” – French Hussars in Napoleonic Uniforms, from Pinterest


The Emperor holds what is called an “audience” every Sunday morning, when he is in Paris. This is a fashion of receiving which was abolished by the Revolution and restored by Napoleon I. In 1830 it again fell, and was re-established in 1852 by Napoleon III. With the “audience” fell and rose the offices of Chamberlains — persons especially charged with all that concerns the interior household of the Sovereign. There are eleven Chamberlains, and seventeen who have the titles and honors without performing any particular duty. In the olden times, it was the first officers with this title who handed to the King the first article of toilet on rising in the morning, as it was the first Lady of Honor who performed the same service for the Queen, and we presume this is one of the fashions which does not change!

In order to obtain an audience it is necessary first to obtain permission by letter. When one possesses the proper credentials, he appears at the door of the Palace of the Tuileries, and hands his letter to a hussar, who is clothed in black, with a silver chain around his neck. When he has examined it and is satisfied that it is authentic, he ushers the bearer into a grand hall, in the center of which is a miniature column, in bronze, of the one which towers upon the Place Vendôme. Here they wait a little, and are then introduced into the reception room, where they are received by the Chamberlains, clothed in red, with gold keys embroidered upon their breasts. If there are many persons, they are placed in a row to wait till the Emperor enters, preceded by hussars and followed by his État Major.

He passes along the line, bowing to each, till he arrives at the head, when he stops and converses with the person, who has some favor to ask or someone to propose, and is so situated that no other one present can hear what is said, though not far off. He wears on these occasions, the military costume of General of Division, with the grand cross of the Legion of Honor, and is said to listen very patiently to all who come, and to promise uniformly to think of them afterwards. The costume of gentlemen who seek this favor must be invariably in black, with white cravat and white gloves. The Chamberlain tells him when to advance and when to retreat, and the Emperor is so gracious that, expecting to be frightened out of his senses, he is most happy to find that good manners are the same everywhere, in palace and in cottage, with the prince and the peasant. – Letter from Paris, 1866

Etiquette Enthusiast, Maura J. Graber, is the Site Editor for the Etiquipedia© Etiquette Encyclopedia
Posted by Etiquipedia at 12:01 AM