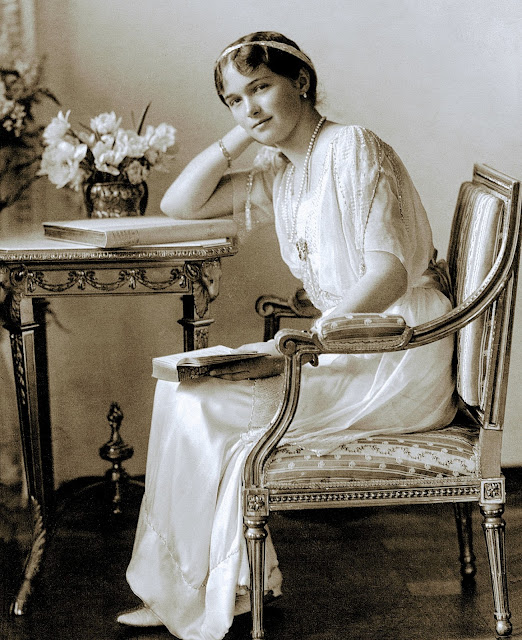 Olga Nikolaevna Romanova as a young royal teen. – During her short lifetime, Olga’s marriage prospects were the subject of great speculation within Russia. Matches were rumored with many royals from other countries, but Olga herself wanted to eventually marry a Russian and remain in her home country. During World War I, Olga nursed wounded soldiers in a military hospital and oversaw administrative duties at the hospital. Olga's murder following the Russian Revolution of 1917, resulted in her canonization as a passion bearer by the Russian Orthodox Church. Her remains, along with those of the rest of her Russian royal family members, were identified through DNA testing and were buried during a funeral ceremony in 1998 at Peter and Paul Cathedral in St. Petersburg.

ST. PETERSBURG, April 25. Grand Duchess Olga, first and perhaps best beloved of the Czar’s daughters, has broken her engagement to marry Prince Charles, son of the Crown Prince of Roumania, who in the nature of events, will sit on the Roumanian throne. The young couple—she is 18, he 20—were affianced, its these despatches told first and exclusively. But at the last moment when the date of the wedding had been actually fixed, the Grand Duchess threw herself at her father's feet and implored him not to render her life miserable, not to compel her to marry a man whom she does not love; whom she never can love, and protested. The Czar, tenderest, most affectionate of fathers, embraced his daughter, dried her tears and assured her she shall not marry Prince Charles, who, after all, is a handsome and engaging young fellow. So his Majesty explained to the Roumanian Crown Prince and Princess that he must consider his daughter's feelings and respect her wishes above all else.

Prince Charles took the North Express for Berlin that very night. Such marriages, of course, are made in the chancellories, but the young Prince thought he had found favor in the lady’s eyes. Her “I will not,” or, rather, her father’s “she shall not,” provoked many other unhappy consequences. The Empress had set her heart upon the match, used all her influence with her daughter to consent to the betrothal which actually was made. The Roumanian Crown Prince and Princess and Prince Charles became the Czar’s guests at the palace at Tsarkoe-Selo. There a state luncheon was given to which the Imperial family was bidden and even the members of the Roumanian legation, that they might be presented to their future Queen. The Duchess of Coburg, Prince Carol’s grandmother, was so overjoyed by the engagement that she sent to Court Jeweler Bolin here, two splendid gems of rare beauty; a huge ruby and an emerald. Wedding presents from her father, the late Emperor Alexander II, to be reset, to offer them to the Grand Duchess Olga. The jeweler had submitted to the Duchess several drawings, out of which she selected two. Then Olga’s tears prevailed on her father. Some dreadful scenes, scoldings, reproaches followed between the Empress and the young Grand Duchess. It is safe to say the Czar did not escape, for his august spouse has a temper of her own when her nerves are stretched.

The Crown Prince of Roumania and his consort left Tsarskoe-Selo abruptly for St. Petersburg, three days ahead of the original program of their visit. The Crown Prince took leave of the Emperor at a parade here, but the Crown Princess did not go to the palace to bid farewell to the Empress, which all the members of the Imperial family did before her departure for the Crimea. The Empress, on her side, did not return the Crown Princess’ visit whilst the latter was in town, a visit which etiquette demanded; and the Emperor appeared quite embarrassed at the parade when parting from his Roumanian guests. The Crown Princely pair soon left for Bucharest. The Emperor and Empress, with their children, went to the Crimea by special train a few days ago; it was noticed that the Grand Duchess Olga looked extremely pale and worried. The Dowager Duchess of Coburg, half sad–half angry, has left St. Petersburg and this may not be all —a girl’s tears may cause political complications. Everyone in Court circles is whispering: “If not Prince Charles, who has won the Grand Duchess Olga’s maiden heart?” – Morning Press, 1914

Etiquette Enthusiast, Maura J. Graber, is the Site Editor for the Etiquipedia© Etiquette Encyclopedia
Posted by Etiquipedia at 11:22 PM