Etiquette and the Fancy Dress Ball 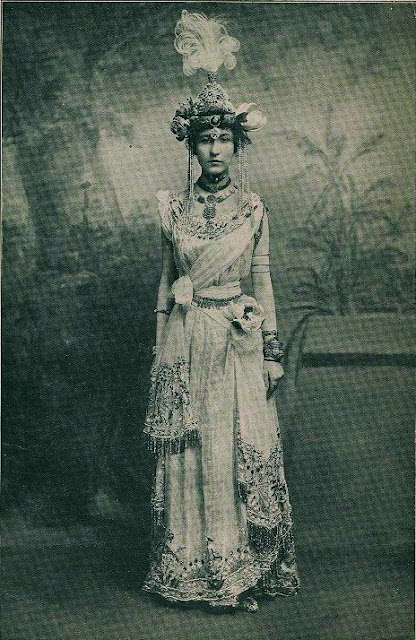 Engaged to Duke of Roxburghe, Miss May Golet (photographed  in a suitably elaborate costume for a fancy dress ball) went on to become the newest “American Duchess” of her day. – The Devonshire House Fancy Dress Ball was held on the 2nd of July, in 1897, to celebrate Queen Victoria’s Diamond Jubilee. Hosted by the Duke and Duchess of Devonshire, with many prominent royals, aristocrats, and society figures in attendance, it was considered the highlight of the 1897 London Season. Throwing a fancy dress ball was undoubtedly the most fashionable and lavish way for a society hostess to establish herself during the later part of the Victorian era. The fabulously and richly costumed affairs, were widely covered in the newspapers of the day. Every detail of who wore what was covered. For those with more money than social savvy or fashion sense, fancy dress etiquette advice was dished out in costume manuals and books. Guests dressing up as famous historical figures was most popular, but in some cases, peasant costumes from a particular historical era, or dressing up as food, was at times de rigueur.

LONDON, England, July 2.— The Duchess of Devonshire's historical fancy dress ball to-night was the final gayety of the Jubilee season.

It was an affair which gained only less advance notoriety than the Bradley-Mar-tin ball given in New York City last winter. No royal palace in England was ever filled with a more gorgeous throng than assembled to-night in Devonshire House. The Duchess of Devonshire, as Zenobia, wore a costume of green, white and gold and many huge diamonds. Diamonds hung from the horns of her gold helmet, which was studded with jewels, while beautiful pearls gleamed in chains about her head and shoulders. The Duke of Devonshire appeared as Charles V of Germany.

On the arrival of the royal guests the Duchess conducted them to a dais, where they formed a magnificent group. All wore sixteenth-century costumes, most of them blazing with jewels. The Princess of Wales, masquerading as Marguerite de Valois, appeared in a white and gold dress, with an Elizabethan ruff and with a heavy train gorgeously embroidered with gold and silver, bestudded with many colored jewels. In attendance upon her were her three daughters and the Duchess of York, the last named in a pale blue gown embroidered with silver. Princess Victoria of Wales was attired in a blue and gold brocade costume, embroidered with fleur-de-lis in gold and white.

Six courtiers, members of the highest nobility, wearing handsome costumes of the period of Henri Trois, accompanied the Prince and thePrincess of Wales. The Prince, as Grand Master of the Knights of Malta, wore a doublet and trunk hose of black Genoese velvet slashed with gray and white, with a Maltese cross embroidered on his left breast. He wore orders of the Garter and of the Knights of Malta. His hat, high and narrow, was encircled by a jeweled chain. There was a diamond cross in front and white plumes behind. A velvet cape embroidered with a Maltese cross completed his sumptuous equipment.

The Duke of York as Earl of Cumberland, Queen Elizabeth's Master of Horse, wore one of the most striking costumes. It was composed of a gray velvet doublet and cape embroidered with broad bands of gold, a steel gorget inlaid with gold, crimson velvet trunks slashed with gray satin and embroidered with gold, and high boots. His cape was lined with crimson satin. The Duke of Connaught appeared as an Elizabethan general, he wore a steel cuirass inlaid with gold, and the remainder of his costume was of dark gray velvet slashed with satin and embroidered with gold. The Duchess of Connaught as Anne of Austria wore a costume of pale tan and rose.

Prince Charles of Denmark appeared as a Danish student in dark purple. The Grand Duke Michael of Russia wore a black and gold Henri Quatre suit. The foregoing in no wise exhausting the list of royal personages present, all of whom were caparisoned in the costliest costumes and with the greatest attention to historical accuracy. Many dresses had necessitated a dozen or more sketches by authorities, and were works of high art. Among the guests was Mrs. Ogden Goelet of New York, who wore a wonderful white costume covered with diamond crescents and stars. – San Francisco Call, 1897

Etiquette Enthusiast, Maura J. Graber, is the Site Editor for the Etiquipedia© Etiquette Encyclopedia
Posted by Etiquipedia at 6:38 PM