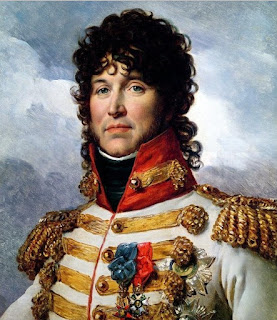 But everyone knew the family patriarch was a hostler! – Joachim-Napoléon Murat was a Marshal of France and Admiral of France under the reign of Napoleon. He was also the 1st Prince Murat, Grand Duke of Berg from 1806 to 1808, and King of Naples from 1808 to 1815. Murat was Napoleon’s brother-in-law (through marriage to his younger sister, Caroline Bonaparte). He was noted as a daring, brave, and charismatic cavalry officer as well as a flamboyant dresser, for which he was known as “the Dandy King.”

Of Other Matters, Other Courts and That of France

The King of Portugal has gone home enlightened and follows the example of Italy and Belgium. He has removed tbe trammels from the press, and proposed a system of public instruction by which education may be universally diffused. In Sweden, the uniform worn upon state occasions is red. The other day a Minister attended some important ceremony in an ordinary suit of black, saying to the King, “As the nobility have been deprived of their last privileges it is not worth while to appear in court dress.” “NO,” replied the King, “it is of no consequence whatever, and if you choose to come in white it is all the same to me.” In Sweden and Denmark the pomp and parade of State ceremonies are not considered of much more importance than in republican Switzerland. In Italy and Belgium it is nearly the same.

The Emperor of France is very rigid about some points of etiquette, but his regime is by no means so formidable as that of Louis XIV ; but there are a few in France and every country of Europe whose ancestors fluttered at the court of this haughty Monarch, who regret more than anything else the hauteur and exclusiveness which they believe his lineal descendants would have retained in the circles of the Tuileries. At a mask ball, not long ago, the famous Marquis de Boissy wore a coat in which his grandfather had appeared at the Court of Louis XV. The Prince Murat remarked to him that it was very funny at the present day. The Marquis replied that if all who were there had worn the coats of their grandfathers, some would nave been more funny than his. The grandfather of the Prince, as every one knows, was a hostler. – Letter from Paris, 1866


Etiquette Enthusiast, Maura J. Graber, is the Site Editor for the Etiquipedia© Etiquette Encyclopedia
Posted by Etiquipedia at 2:43 PM