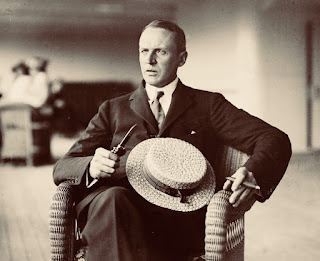 “The more one travels,” he said, “the more tolerant one becomes of the social faux pas.” – Well-known philanthropist, Paul J. Rainey, was active with the American Geographical Society, American Museum of Natural History, Smithsonian Institution and New York Zoological Society, among others. His six-reel documentary film, “African Hunt” was released in 1912. The Jungle Film Corporation commercialized Rainey’s African hunt footage. Successful in the U.S. and abroad, these films were the first motion pictures to be produced at regular theater prices.

Paul Rainey, at one of his private cinematograph exhibitions, spoke of his travels in the wilds of Africa. “The more one travels,” he said, “the more tolerant one becomes of the social faux pas. An English Duke, visiting China, is just as ignorant of Court etiquette as the western cowboy. And if dining with a certain King in Somaliland, I refuse to swallow the terrible ball of monkey meat and meal that he moulds with his fingers at table and thrusts into my mouth, I am committing a great blunder.”

“But we are too sensitive, especially we Americans,” said Mr. Rainey, “about social blunders. I am reminded of a New York hostess who so worried her butler with instructions as to how he was to address a Duchess at the luncheon table that when, quite, respectful, assiduous, he proffered her a dish of game, he nervously asked: ‘Cold grace, your grouse?’”—New York Tribune, 1912

Etiquette Enthusiast, Maura J. Graber, is the Site Editor for the Etiquipedia© Etiquette Encyclopedia
Posted by Etiquipedia at 9:45 PM