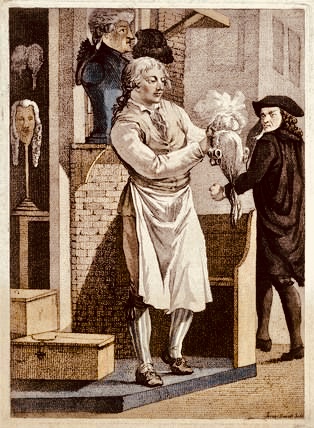 A lot had changed in the etiquette of men’s wigs in a little over a hundred years. Men went from the powdered, white wigs of the 1700’s and 1800’s, to the natural looking wigs of the early 1900’s - “A cardinal point in the etiquette of wig wearing is that one should not wear his wig in bed. It is not proper. Some, either from motives of extreme vanity or from an unwillingness to shock the delicate sensibilities of their families, sleep in their wigs. This practice is condemned unhesitatingly. It is unclean.”

Bald Men, With Care, May Complete the Illusion They Seek

The baldheaded man who is not resigned to his fate, and who is posted on the etiquette of wig wearing, adorns himself with a faithful copy of nature which simulates his poverty instead of her wealth, says the Chicago Tribune. For an artistic wig for a man, is usually made thin or nearly bald on the crown, so as to allay suspicion. When the wig is adjusted to the man's head, the pink scalp shows through the white net of foundation at the crown, thus leaving a modest suggestion of baldness. This is the first principle of the etiquette of wig wearing— claim too little, rather than too much, of nature’s covering.  This principle is carried to a refine ment of perfection by the man who can afford the luxury of buying several wigs, for he may then make the transition from baldness to a semblance of his former self cover, a space of two or three years, and thus complete the deception, which is the aim of all wearers of wigs.

A cardinal point in the etiquette of wig wearing is that one should not wear his wig in bed. It is not proper. Some, either from motives of extreme vanity or from an unwillingness to shock the delicate sensibilities of their families, sleep in their wigs. This practice is condemned unhesitatingly. It is unclean. One should substitute for the wig worn during the day a simple nightcap of muslin, to insure one against taking cold. In the morning, as the last touch of perfection to the toilet, the wig should be delicately adjusted and then glued to one’s head. If this adjustment is carefully made and if one is wearing a really fine wig, he may defy both wind and sunlight to betray that “things are not what they seem.” This direful adjustment of the wig is a most important point. It requires eternal vigilance, since a single careless adjustment means ruin.

Along the edge of the wig of ordinary size are five spots about half the size of a penny where the paste or glue is applied with which the wig is made fast to the head. The paste must be carefully applied, since if it comes in contact with the hair, it destroys its life-like appearance. A practice generally observed by the wearers of fine wigs, is that of dressing the hair in a variety of ways. This is desirable, since it suggests a natural head of hair, yet this practice is perfectly possible with a really fine wig, every hair of which is separately attached to the net foundation. – The Morning Press, 1904

Etiquette Enthusiast, Maura J. Graber, is the Site Editor for the Etiquipedia© Etiquette Encyclopedia
Posted by Etiquipedia at 2:37 AM