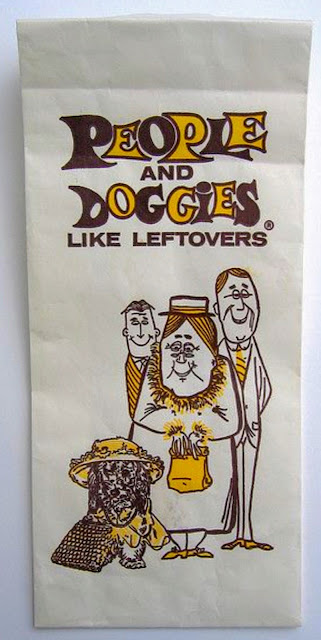 “Doggie bags” have an interesting history in the United States. They were first promoted as a way to combat food shortages in 1940, when the U.S. became involved in WWII. Pet owners were encouraged to feed pets their table scraps. Shortages of food were a sad fact of day to day life, so like “Victory Gardens,” feeding Fido one’s restaurant leftovers seemed like a great idea. Soon, eateries across the U.S. began similar practices, but when people began requesting doggie bags to take home the leftover meals for themselves, some etiquette columnists quickly wagged their fingers at this new development. “I do not approve of taking leftover food such as pieces of meat home from restaurants,” Emily Post’s newspaper column decried in 1968, though Emily Post herself died in 1960. “Restaurants provide ‘doggy bags’ for bones to be taken to pets, and generally the bags should be restricted to that use.” Nowadays, people in the U.S. have no qualms about asking the wait-staff to wrap up a remaining entrée for enjoying later. After all, if one has already paid for the food, there is no reason for it to wind up in a landfill somewhere.

DEAR ABBY – My husband and I both work downtown and live in the suburbs, so we often eat dinner together downtown after work. We are usually served more than we can eat, so we ask for a “doggie” bag to take home the leftovers. We tried a new place, and when we asked our waiter if we could take our leftovers home, he came back with a pint-sized carton with a little wire handle the kind you get when you buy ice cream to carry home. We felt embarrassed putting our leftovers, like so much “garbage,” into this carton in plain view of everybody. In other restaurants, they transfer your leftovers into a doggie bag in the kitchen and give it to you at the end of the meal. Please print this so we can mail it to the guilty restaurateur. Thank you. - Diners


DEAR DINERS –The “guilty restaurateur” may not feel so guilty after all. Read on for a letter I received the same day yours arrived, and file them both under: “Damned if you do, and damned if you don’t.”


DEAR ABBY – My wife and I are both 75 years old and we go out to eat two or three times a week. We usually order two meals and take home what is left. Last Sunday we went to a nice place and the food was not cheap. We both ordered prime rib steak. We shared my plate, and my wife ate a small piece of her steak, and asked the waiter to wrap up the remainder to take home. When we were ready to leave, wc asked the waiter for our check and the leftover meat. He came back and told us that the meat had already been thrown out, so I told him to bring us another piece of beef! He returned with a piece of meat, saying he was able to retrieve it before they threw it in the garbage We looked at the meat, and it wasn’t ours. We were sure it wasn’t, because it had some rice on it and we didn’t order rice! (Evidently he took it out of the garbage can.) We were outraged, and told him to bring us a new piece of beef which he did. From now on, if we have food to take home, we always ask the waiter to bring the container to our table! - DelrayBeach   (Both Letters From Dear Abby, in the Desert Sun, 1988)


Etiquette Enthusiast, Maura J. Graber, is the Site Editor for the Etiquipedia© Etiquette Encyclopedia
Posted by Etiquipedia at 12:16 AM