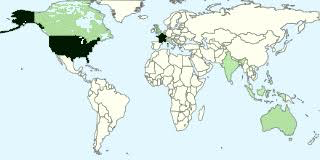 The last 3 days, the French have been reading up a storm on Etiquipedia, so I wanted to send out a special note of thanks to our French readers, and those readers from all of the other countries, who peruse our articles daily. Below are our “audience stats” for the past 7 days. These are the top 10 countries for the week. France has been #1 three days in a row. Without people from all parts of the world reading Etiquipedia, the work I put into this site would not nearly give me such pleasure. Thanks to all of our readers and to all of our contributors!

The words “Bon appétit” should never be uttered at the start of a meal.

The polite passenger always says, “Bonjour” to the driver upon entering the bus.

And, bien sûr, the dinner guest must not leave the table in midmeal to use the powder room, and should she have to go, never, ever use the word “toilette” when asking a host for directions.

Mastering the rules of good manners never has been easy, even for the French.

Despite a centuries-old obsession with behaving well, the French are constantly relearning how to do it, and the last few years have witnessed both the degradation of civility and manners and a revival of interest in them.

On one level disrespect for authority is on the rise. Cars are burned and garbage is thrown out of windows in the troubled gritty suburbs. Verbal and physical attacks against teachers in schools are more widespread than they were a few years ago. Commuters are hit, seats are slashed, graffiti is written on Paris Métro cars.

But on another level is a desire to retain, encourage and even venerate what the French call “politesse.” “It sounds bizarre, but with more and more acts of incivility, people are tolerating them much less,” said Frédéric Rouvillois, the author of “Histoire de la Politesse,” a scholarly tome that traces the history of good manners in France over the last three centuries. “There’s more awareness that courtesy and savoir-faire are useful and necessary tools in society.”

As part of the consciousness-raising, private sessions on proper table settings and dining habits are offered to Parisian ladies of leisure. The Paris transit authority is in the midst of a campaign of respect to improve the quality of travel for its passengers. Humorous posters hung last fall prodded travelers to muzzle their pets; use trash cans for their garbage; speak softly on their cellphones; avoid whacking their neighbors with their backpacks; and, of course, say hello and goodbye to conductors and ticket vendors.

In 2005, in response to complaints about interaction between patients and staff, the Hospital Federation of France began its first national advertising drive for politeness in public hospitals and nursing homes, with a list of rules for how to behave and the motto “Stay polite!”

The Ministry of Education has made good citizenship part of the national curriculum in high schools. The Ministry of Transportation designates an annual “day of steering wheel courtesy” to encourage polite behavior on the road.

“In a society more and more brutal, with deafening vulgarity, it is with delight that we are rediscovering the discreet charm of courtesy,” wrote Point de Vue, a weekly magazine that focuses on old families and the remnants of royalty, in an article some months ago on the return of good manners.

In the perfect French world, rules govern even the most mundane subjects: how to answer the telephone, how to greet a guest at the door, how to address a stranger, what to take to a dinner party, how to behave on the Métro.

“It’s like a sport, you have to train hard,” said Marie de Tilly, a rail-thin expert on manners, who teaches a two-hour course in Paris to women who pay $90 to attend. “But once you train and know the rules, it all comes naturally.” All can be lost in that first moment of acquaintance, Ms. de Tilly told a group of French and American women during a session last month in a hotel room adorned in brocade and silk.

“In the first 20 seconds, others will judge your look, in the second 20 seconds your behavior and the third 20 seconds your first words,” she said. “There is a code. If you don’t follow it properly, it will be very, very hard to make a comeback.”

France has had an uneven history of manners. With the French Revolution, the republican passion for equality trumped the rules of gentility, which glorified hierarchy and differences of class and gender. Men had to be called “Citoyen” (Citizen) rather than “Monsieur.” The use of the familiar “tu” form of “you” replaced the formal “vous.”

The rise of the bourgeoisie in the 19th century swept in a new era of politeness, which declined during and after World War I. The brutality of the war made the rules of gentility seem meaningless. Another low point came with the May 1968 rebellion, which swept in an ideology that challenged all forms of authority.

Certainly, polls show an increase of interest in manners. Ninety-five percent of the French believe that being polite is an asset, according to an Ipsos poll last March. A poll in 2003 indicated that 70 percent of French parents place great importance on manners, compared with 53 percent in 1991 and 21 percent in 1981.
Some rituals of politesse die hard. Dueling may have been banned decades ago, but hand kissing has survived. The master has to be President Jacques Chirac.

Mr. Chirac clearly knows how to do it: he raises the woman’s hand to chest level and bends over to meet it halfway. Sometimes, as when he visited Chancellor Angela Merkel in Berlin last March, he cradles the hand in both of his.

“The French president,” a writer in the Swiss daily Le Matin commented last September after Mr. Chirac kissed Ms. Merkel’s hand once again, “can no longer meet a woman, either a star, a head of state, a first lady or a minister, without doing it.”

The practice, however, the writer added, “has nothing to do with protocol.” – From Elaine Sciolino’s 2007 New York Times article


Etiquette Enthusiast, Maura J. Graber, is the Site Editor for the Etiquipedia© Etiquette Encyclopedia
Posted by Etiquipedia at 10:18 PM