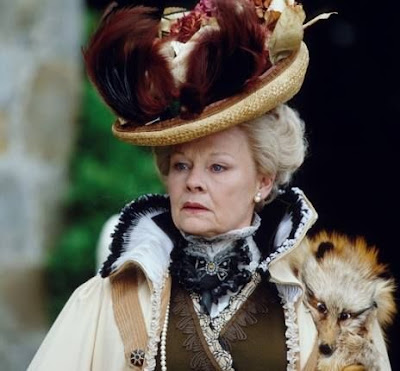 The “insular British female” of a certain type, still holds her own and she is inveterate in her prejudices and as narrow in her views as her great-grandmother was a hundred years ago. To such a one, the sight of an attractive American is like the red flag shown to a bull.

It certainly is a fact that in England nowadays what are known as “American ways” have obtained a widespread popularity among the ultra fashionable people. Notwithstanding the decidedly radical change in British manners and customs during the last decade, the “insular British female” of a certain type, still holds her own and she is inveterate in her prejudices and as narrow in her views as her great-grandmother was a hundred years ago. To such a one, the sight of an attractive American is like the red flag shown to a bull.

An English officer who has a sense of humor recently told a story of an amusing experience which befell him while traveling with his mother-in-law to the tidal train to Dover not very long ago. “It might be well to tell you in the first place,” he said, “that I am afraid, of the old lady, particularly as she holds the purse-strings and can visit my misdemeanors on my head in very unpleasing fashion. So I always make a point of carefully agreeing with her in every remark she makes, and of course while traveling, I am most obsequious. On this particular occasion I had hardly settled her comfortably in a first-class carriage when a party of travelers came breathlessly up to our compartment, and, in spite of mamma-in-law’s stony glare, proceeded to take possession of all the unoccupied seats.

There were two ladies in the party, both young and exquisitely pretty and faultlessly dressed, and with them were a couple of men, who also were of very good form and wore irreproachable attire. They were in the gayest of moods, all chatting and laughing together and relating their various adveutures in just catching the train; and although they were most amiable about storing away their various effects out of our way and apologizing to us about crowding the carriage, I could see that my eminently conservative relative was not to be cajoled, and with every minute, she grew stonier and more haughty. “Objectionable Americans!” she muttered to me. “Are you sure they are U. S. A.’s?" I asked, sotto voce. “They are very pretty, and so well dressed.” “Oh, Americans are always that, in a kind of way. Look how underbred their whole style is, and compare them to well-born English women. Oh, they do grate on my nerves!” and she turned her back with obvious scorn upon the interlopers, who, after one or two civil remarks, took no further notice of us.

“When we reached Dover, the young people bade us good-bye in kindly fashion, to which my relative vouchsafed no reply. “Thank  goodness, those vulgarians have gone!” was her parting fling as I betook myself to the telegraph office to wire to Paris for rooms. One of our quondam traveling companions was before me, and there lying on the desk was a telegram form scribbled over with a message it was impossible to avoid seeing. It was evidently addressed to the lady’s husband, and was signed by one of the proudest and best known names in England. Like a flash I realized who the whole party were, for I had seen many a photograph of the two lovely sisiers, who were among the most famous of our English beauties, and whose names were always to be found on the most exclusive lists in that upper stratum of society, which is the accepted, fashion-maker and guide to modern manners.” “What did your mother-in-law say?” asked his amused listener. “Never dared to tell her.” was the reply. “Such jokes are not for the impecunious and dependent son-in-law. I never even told my wife.” – New York Tribune, 1893

Etiquette Enthusiast, Maura J. Graber, is the Site Editor for the Etiquipedia© Etiquette Encyclopedia
Posted by Etiquipedia at 11:16 PM