Etiquette and a Royal Soup 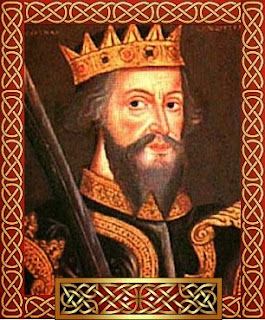 A gratified Monarch, William I, or “William the Conqueror” reigned over England from 1066 to 1087  – In the famous “Bayeux Tapestry,” William the Conqueror is depicted enjoying a fine feast soon after his invasion of England in 1066. If you really wanted to fit into the Norman Court, you needed to mind your manners. You could learn the fine table manners of the day, from a number of etiquette manuals of that period. Daniel of Beccles’ 3000-line poem in Latin, “Urbanus Magnus” (The Book of the Civilised Man), provided an excellent guide to expected courtly behaviour. Medieval etiquette’s maxim was ‘A place for everyone and everyone in his place’. The advice Beccles wrote continues to be relevant; Don’t put your elbows on the table; Don’t lick your fingers; Don’t speak when your mouth is full. ; Belching and spitting were also frowned upon. Or at least if you were compelled to do either, it should be done in the correct manner. If you were to belch, you should look up to the ceiling ; You should never spit over the table but rather behind you or into a cloth; And you should never spit ‘like a rustic’ or ‘eat like a ploughman’. – from English Heritage.org

A Savory Soup Tickles His Palate — Changes Its Name

William I had a fine sense of what was becoming at a royal table. He was so well pleased at one of his little dinners with a savory soup compounded by his cook, Tezelin, that he sent for him and asked how it was named. “I call it dillagrout” was the reply.” “A poor name for so good a soup” cried the King.  “Nathless”—everybody said “nathless” in those days— “we bestow upon you the manor of Addington.” – This manor, I may add, reverted to the Crown. In the reign of Henry III we find it in the hands of the Bardolfs, and held on the tenure of “making pasties in the King’s kitchen on the day of his coronation or providing someone as his deputy to make a dish called “grout,” and if suet (seym) was added, it was called “malpigernoun.”

At James II’s coronation, the Lord of the Manor claimed to find a man to make a dish of grout in the royal kitchen and prayed that the King's cook might be the man. The claim was allowed and the claimant knighted. But what was this “grout?” Was it identical with Tezelin’s “dillagrout” and the Bardolfs’ “malpigernoun?” And was a pottage called “Bardolf,” of which a 14th century recipe has been printed by the Society of Antiquaries, identical with these? If so, as among the ingredients were almond milk, the brawn of capons, sugar and spices, chicken parboiled and chopped, etc., it was doubtlessly a dish for a King.— All the Year Round. – May 4, 1891

Etiquette Enthusiast, Maura J. Graber, is the Site Editor for the Etiquipedia© Etiquette Encyclopedia
Posted by Etiquipedia at 11:32 PM