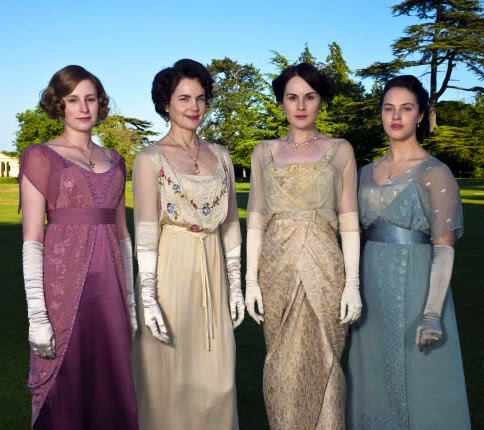 The author is correct. All 4 of the Crawley women do appear a bit awkward in this early press photo from Downton Abbey– They look uncomfortable in their long gloves. They should be clasping the finger tips together when standing. It would be a less unattractive pose. - Photo source, Pinterest

“But what shall I do with my hands?” asks the girl who is conscious of this part of her body when she is in the drawing-room. She should try folding them together in her lap when she is seated and clasping the finger tips together when standing. This position is, of course rather stiff when assumed by an awkward girl. But it is the least unattractive pose for her to begin with, and gradually she will find herself unconsciously assuming characteristic poses which are more or less graceful.

The same teacher finds that nearly every member of her classes in deportment needs to be told how to enter and leave a room. American girls have been severely criticised after they have been out in society, for their bad manners upon ceremonious occasions. Those who are presented at court have to be instructed in every detail of entering a room, withdrawing from it, managing a long train and particularly in walking backward as they must do in the presence of royalty. It is astonishing how few girls and women there are, who can walk backward, even for a few steps, without cutting an awkward figure. In many of the best schools, girls are now taught these simple rules of court etiquette. For one never knows who may be favored by an invitation to appear before royalty.

Fancy dancing and the making of bows and curtseys, help to improve the carriage and poise. And they also teach one how to carry one’s self correctly while facing the hostess and taking one’s departure at the same time. Almost any exercise which develops grace and cultivates self-possession is helpful along this line. For this reason, girls are learning a greater variety of fancy dances than during their class work last year, and gymnasium work, that makes for grace quite as much as physical development, is having unusual stress laid upon it this winter. If when greeting a friend the head and shoulders are brought forward from the waist without bending them the entire figure assumes a new expression. It seems to denote a graciousness that can not be expressed by shoulders and head kept in the same vertical plane with the rest of the body. The forward movement means graciousness, while the stiffer position means awkwardness and ungraciousness.

Over-cordiality is not considered in good taste, except among intimate friends and families, but graciousness is never out of place. It is not easy to express however, without words. This can be done without exaggeration by this simple change of position, and usually the art is taught in the dancing class or in special deportment lessons. Much has already been said about the American girl’s walk. It has been called ungraceful, too athletic, and many more similar things. In spite of foreigners’ disapproval of her carriage, the American girl has a freedom in her walk as she swings along the avenue that is not without attraction. With head held up, shoulders bent ever so slightly forward, she walks with a quick, firm step. In the country she is permitted to swing her arms for exercise. Physicians claim that this part of the walking exercise is most beneficial, because the constant movement expands the lungs and makes deep breathing necessary.

Each step should be taken from the hips, not from the knees. A knee walk is awkward, incorrect and does not give the proper exercise, and, above all, it is tiring. For the drawing room the out door athletic stride must be toned down considerably. There are physical instructors who find it necessary to caution their girls about walking athletically when in the city. They feel nervous and ill at ease if they are compelled to walk sedately into a drawing-room with their hands and arms in repose after they have grown accustomed to swinging them freely. The teacher must decide whether it is wiser to suggest giving up the athletic, outdoor style for the indoor, or to sacrifice the drawing-room repose for the outdoor freedom. With a little training, however, it should not be too difficult for girls to walk in both of these approved fashions and to express the greatest possible freedom in their sports and games and walks, for, after all, these help toward the cultivation of future grace. – San Francisco Call, 1911

Etiquette Enthusiast, Maura J. Graber, is the Site Editor for the Etiquipedia© Etiquette Encyclopedia
Posted by Etiquipedia at 1:59 AM