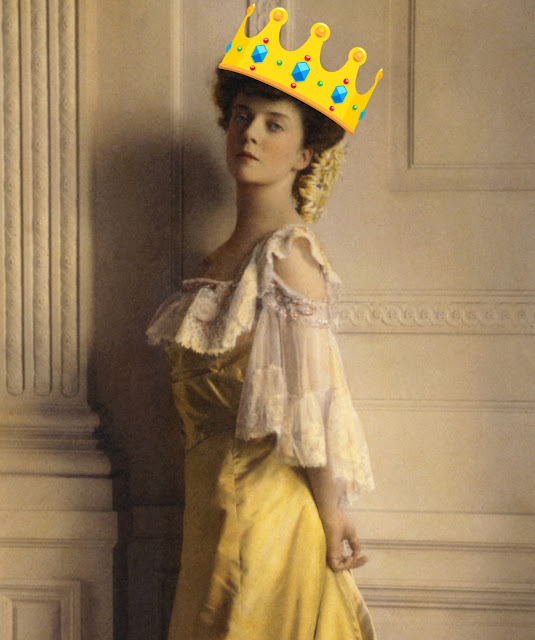 A favorite of the press for flouting the expected etiquette and social norms of the era, Alice Roosevelt (daughter of U.S. President Theodore Roosevelt), made society page headlines with antics that would make some of today’s vulgar reality show “stars” blush. Taking every advantage of her wealth and beauty as a debutante in the Gilded Age’s aristocratic society, the press soon dubbed her “Princess Alice.” Commenting on her every move,  even a shade of blue-gray, which was reportedly her preferred color, was popularized in the news as “Alice blue” and later immortalized by a song it inspired, “In My Sweet Little Alice Blue Gown.” After her 1906 marriage to an Ohio State Representative, Nicholas Longworth, she devoted more time to politics, and less to society, though her personality changed little. Her scathing imitation of her first cousin, Eleanor Roosevelt, was a popular social entertainment in Republican circles, and she purportedly kept a embroidered pillow in her home which read, “If you can’t say something good about someone, sit right here by me.”  Alice remained active in political circles long after her husband’s death, earning her the nickname, “Washington’s other monument.”  Her continued commentary, biting wit and gossip on the D.C. political scene, kept Alice in the news well into her later years. She passed away in 1980.

There is something courageous in the bellicose attitude of the ladies of the Kentucky Prohibition party who have had the temerity to criticise the President’s daughter in a set of resolutions. Though everybody should have proper respect for the President and his family, there is often a tendency to toadyism and undue obeisance. The Kentucky delegation of women Prohibitionists were recently incensed to discover that some of the “mere men” of the party had invited Mrs. Alice Roosevelt Longworth to attend the Prohibitionist Convention at Columbus, Ohio, as Kentucky’s Guest of Honor. As soon as this matter was brought to the attention of the ladies they passed some resolutions to the effect that Mrs. Longworth would not be welcome because she had attended the Lexington horse-races with a well-known man of the world, because she smokes cigarettes, and because she lately forgot her years and dignity so far as to place a tack on a chair in the gallery of the House at Washington, causing much pain and annoyance to a diplomatic visitor.

There was a great buzzing of voices to prevent the adoption of the resolution, for fear it might be construed as an insult to the President, but the resolution was passed, and the friends of the Princess were mortified. It may be that the incident is to be regretted, but if a President will give the country his strenuous daughter, she can hardly expect any other than a strenuous handling. Kentucky women are accustomed to high ideals, having been reared in an atmosphere of chivalry where etiquette and the proprieties of life have found their most delicate bloom. They can not tolerate the hoiden, or any woman whose ideas of a good time, find materialization in school-boy pranks of a character likely to cause a distinguished diplomat to spring through the ceiling or to die of lockjaw from the presence of a tack which catches its victim in the manner that the Princess caught hers.

Possibly Mrs. Longworth is to be excused for her strenuous joking, and it is probable that the desire to catch unsuspecting quarry may have been inherited from her father, who has been trapping and hooking and shooting game for many years. The ladies of Kentucky are to be congratulated at any rate for having the courage of their convictions and refusing to tremble in the presence of the daughter of a President, when it recognizes as Princely qualities nothing that falls short of the best breeding, in the most refined American homes.— Sacramento Union, 1908


Etiquette Enthusiast, Maura J. Graber, is the Site Editor for the Etiquipedia© Etiquette Encyclopedia
Posted by Etiquipedia at 4:53 PM