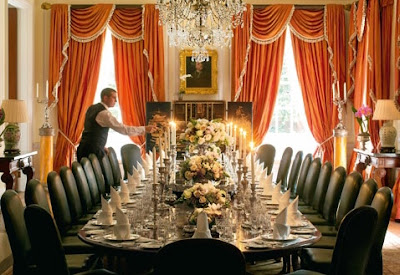 Doilies under finger bowls are for table beautification only, not for use as napkins – Butler preparing the table for a very formal affair, using a candelabra, cutlery and silver that were sent to Washington in 1893 for the British Embassy in Washington D.C. – Photo source, Home and Design Magazine

A pretty story is told of Mrs. Morton’s tact and courtesy, quite equal to the tradition of Lady Washington’s crushing a tea-cup on purpose to relieve the embarrassment of the guest who had inadvertently broken one of her eggshell cups, in his large and careless hand. Mrs. Morton has a set of exquisitely painted doilies from the atelier of a noted Paris artist. One of her political dinner guests, after dipping his fingers in the finger bowl, drew out the priceless filmy square, and crushed it into a ball, trying to dry his hands as he talked learnedly with his hostess. Mrs. Morton smiled with a serenity for which, it is hoped, the recording angel will give her credit and said, “Such flimsy doilies are useless —let me give you another— but you know it’s the fashion.” And the grateful politician accepted the napkin and never knew his mistake.—New York Sun, 1893

Etiquette Enthusiast, Maura J. Graber, is the Site Editor for the Etiquipedia© Etiquette Encyclopedia
Posted by Etiquipedia at 2:01 AM