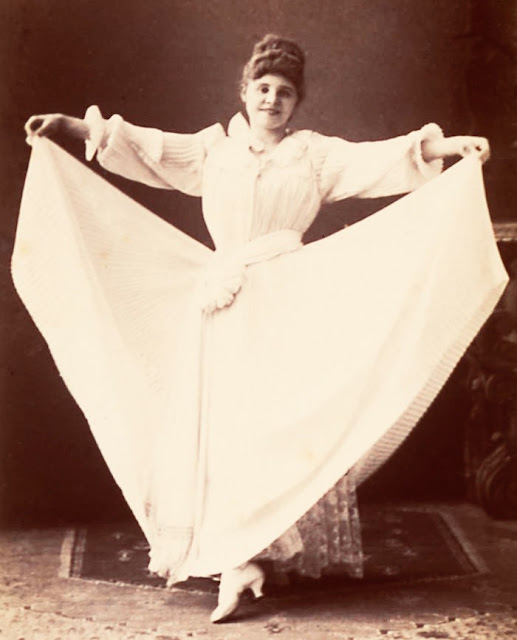 “When she danced in America in 1888, the critics were surprised to see a dancer who did not show her legs and breasts.” –Popular British “Skirt Dancer,” Letty Lind (source Wikipedia)
Skirt dancing was a huge craze, popularized by dancers Kate Vaughan and Letty Lind, until around 1910. Fusing modesty and elements like the grace of ballet and footwork of step-dancing. Step-dancing was seen as lacking in grace and considered “common.” A dancer’s skill in the manipulation of up to 12 metres of fabric in the skirt of her costume was key. According to Wikipedia, “Skirt dancing’s advantage over ballet was that people could do it at home, and it became popular among all social classes. Lind was able to differentiate herself from other skirt dancers because she had the benefit of classical training that most of them did not, and she often added an acrobatic touch to the end of her dances.”

Fashionable women are not all of them contented with society dancing. The interest in skirt, serpentine and Spanish dancing has been a caprice of the last two seasons, which is still in strong evidence. “I have on my books,” said one of the most prominent teachers of skirt dancing, “the names of many women who are well known in New York society. They come, some of them, under assumed names, and many of them with any excuse except the frank one of wanting to learn how to do the dance.” It is true, however, that many women do undertake stage dancing because they consider it excellent gymnastic exercise and beneficial to their health. Others practice it in connection with their Delsarte course. Others still think the supple movements will improve their gait and carriage, and still others take a serious and thorough course to reduce their weight.

In the practice for skirt dancing, every muscle of the body is brought into active play, and superfluous flesh is kept down. Several well known New York actresses, whose duties never call for any sort of dancing, are adepts in the skirt steps, having learned them for this very purpose—to counteract a tendency to stoutness. “Women of all ages, from 16 to 50, are found in my classes, and the elder women are, many of them, as light and graceful as their younger classmates. All fancy they have a talent for the work, and many give evidence of having practiced at home before taking lessons. There are a number of small women's clubs and coteries of intimates whose existence is not suspected outside the initiated, at whose gatherings the skirt dance is done with varying proficiency by different members. Two that meet in lovely rooms on the top floor of Murray Hill homes count some of my pupils among their members, and they are delightful dancers. The devotion to skirt dancing has grown much this season over last, and the caprice shows no sign of abatement.” —New York Times, 1893


Etiquette Enthusiast, Maura J. Graber, is the Site Editor for the Etiquipedia© Etiquette Encyclopedia
Posted by Etiquipedia at 12:00 AM