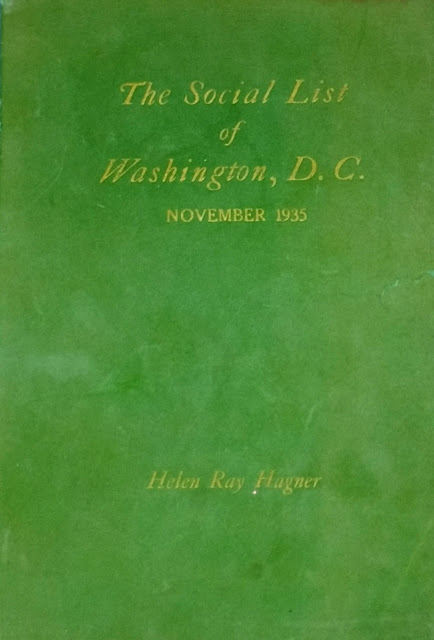 The etiquette behind why Jimmy Carter and Liz Taylor were in, and Gerald Ford was out of the 1977 edition of the Washington D.C. Green Book. – Founder Helen Ray Hagner created the social registry, called “the Green Book,” in 1930. It is an annual “who’s who” in our nation’s capital. A comprehensive list of Washington D.C.’s elite. The book currently includes some 5,500 names, addresses (with winter and summer homes), phone numbers, maiden names and even children’s schools. According to Hagner’s great-grandson, when interviewed by the Washington Post, one cannot pay, nor bribe their way into the book. Many have tried over the years. And if one is on the list, there’s no guarantee of staying there. VIPs have been dropped from the book. They even claim to be very careful about who gets to buy a copy each fall, so mind your P’s and Q’s!


WASHINGTON (AP) - Jimmy Carter is in. So are Liz Taylor and Henry Kissinger. But Jerry Ford is out. And Bert Lance is in barely. The Green Book, the 1978 Washington Social Register of who counts and who doesn't in the nation's capital, is off the presses. Carter wasn't listed last year, but he's in this year because he lives at the most prestigious address in town the White House. Actress Elizabeth Taylor is in because she married potential senatorial candidate, former Navy secretary and Virginia estate-owner John Warner, who also owns a house in Georgetown. Former President Gerald R. Ford isn't in this year because he moved out of town after he left the White House. But former Secretary of State Henry Kissinger made the list because he still lives in the city. Lance, who resigned under fire as Carter's budget director, doesn't live here any more, but he left town after the social register was printed.

Known as the Green Book because of its fuzzy, Kelly green cover, the social list contains most White House executives, members of Congress, the Supreme Court, ambassadors, party givers and upper crust. And it gives the dos and don’ts of capital etiquette. One of its most useful functions is that it serves as a handy telephone directory for many of those who find it socially unacceptable to list their telephone numbers in the local telephone book. Addresses, too, are listed. Except, say Green Book staff members, for a select few, like Chief Justice Warren Burger, who considers it a security risk for folks to know where he lives. The book says his address is: Supreme Court of the United States, 20503. For $31.50 you, too, can get this nifty little guide on whom to seat below the salt (assistant chiefs of protcol); how to address Rep. Thomas P. O'Neill of Massachusetts (My dear Mr. Speaker); and what it means when someone leaves you a calling card enscribed “P.P.” (pour présenter, or, if you no parlez Francais “to introduce.”)

But if you have to send an invitation to a man and his wife, watch out if she’s one of those liberated types, like Deputy Director of Action, Mary King, who keeps her maiden name. The Green Book says King is really Mrs. Peter Bourne. If asked however, Mrs. Peter Bourne insists she is Mary King. “We refuse to get into the business of listing people this way,” said Jean Shaw Murray, the Green Book's new publisher. “It isn't correct, and we won't be pushed into it.” Murray took over as publisher this year from her mother, Carolyn Hagner Shaw, who died last spring. – San Bernardino Sun, 1977

Etiquette Enthusiast, Maura J. Graber, is the Site Editor for the Etiquipedia© Etiquette Encyclopedia
Posted by Etiquipedia at 6:27 PM