Presidential Etiquette and Thanks 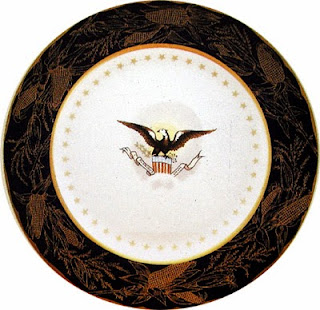 In 1840, gold table settings became Presidential campaign issue. Helping William Henry Harrison, a simple frontiersman, grab the Presidency from Martin Van Buren. When Benjamin Harrison, his grandson, won the Presidency later, his wife, Caroline Harrison, wanted new White House china that would be “symbolic and meaningful to Americans.”  The First Lady, knowledgeable of the expected social graces of the day, was an artist herself. She placed the Coat of Arms of the United States in the center of the plates, and designed a goldenrod and corn motif, etched in gold around a wide band of blue. The corn represents Mrs. Harrison's home state of Indiana. Forty-four stars, one for each state at the time, make up the inner border. Mrs. Harrison directed a large-scale remodeling effort of the White House, adding a china closet to display all past Presidential china services. Caroline Harrison was not able to use the china she had ordered, as she died before it was delivered. The china arrived in December 1892.

A Card of Thanks from the President

“I desire for myself and for the ladies of our party, to give an expression of our thanks for many individual acts of courtesy, which, but for the pressure upon our time, would have been specially acknowledged. Friends who have been so kind, will not, I am sure, impute to us any lack of appreciation or intended neglect. The very excess of their kindness has made any adequate, and much more, any particular, return impossible. You will all believe that there has been no purposed neglect of any locality or individual. We leave you, with all good wishes for the State of California and all her people.”

Originally published May 4, 1891 in the Daly Alta News, California

Etiquette Enthusiast, Maura J. Graber, is the Site Editor for the Etiquipedia© Etiquette Encyclopedia
Posted by Etiquipedia at 1:34 AM