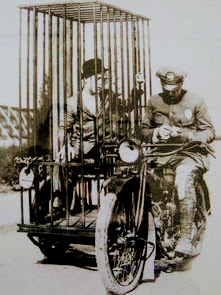 
Pays to be Polite to Peace Officers;
He Studies Etiquette...

CHICAGO, Aug. 4.--The wise man is polite to the traffic cop. By the law of compensation, the wise traffic cop should be polite to the passerby. Patrick Sheehy, Traffic Officer No. 4598, believes this statement works both ways. He has $25.00 to prove it. When Patrick was given his whistle and a busy corner in the Chicago Loop he had a pretty good training in traffic regulations. But one day he read in a magazine about a bride who was embarrassed because she didn’t know which foot to put first in walking down the aisle to the altar. The left foot is correct, of course. "So I started to study etiquette. Now I am sure of myself, and whenever a motorist attempts to get past me, I never lack words to tell him about it.”

Sheehy is given credit for being the "Politest Policeman" in Chicago police headquarters, and in the Chicago police bulletin. Another reward came the other day, and Sheehy said it happened like this: “A man came up and asked me where he could buy a box of grape fruit and a cheap straw hat. I told him. Then he asked me how high the Masonic Temple was, and I told him. I was going to tell him some interesting stuff about the League of Nations and the Panama Canal, but he would not listen. He went away, and came back in a few minutes with $25.00.” — Red Bluff Daily News, 1921

Etiquette Enthusiast, Maura J. Graber, is the Site Editor for the Etiquipedia© Etiquette Encyclopedia
Posted by Etiquipedia at 10:44 PM