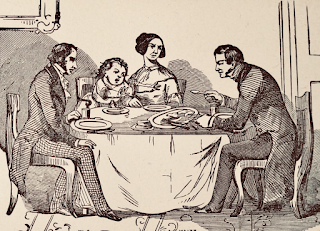 Table etiquette is not, as is often alleged, merely a matter of fashion, although some things that were in vogue a generation or two ago, are no longer deemed polite.The reason is that manners and table furniture have undergone so many changes, have really so much improved, as to require a mutual adjustment.

While certain forms of table etiquette may seem altogether conventional, even fantastic, the forms usually observed are founded on good sense, and adapted to general convenience. Table etiquette is not, as is often alleged, merely a matter of fashion, although some things that were in vogue a generation or two ago, are no longer deemed polite. The reason is that manners and table furniture have undergone so many changes, have really so much improved, as to require a mutual adjustment.

For example, everybody was accustomed, twenty or thirty years since, to use the knife to carry food to the mouth, because the fork of the day was not adapted to the purpose. Since the introduction of the four-tined silver fork, it has so entirely supplanted the knife, that the usage of the latter, in that way, is not only superfluous, but is regarded as a vulgarism. Another example is the discontinuance of the custom of turning tea or coffee from the cup into the saucer. Although small plates were frequently employed to set the cup in, they were not at all in general use; and even when they were used, the tea or coffee was likely to be spilled upon the cloth. The habit, likewise, of putting one’s knife into the butter arose from the fact that the butter-knife proper had not been thought of. Such customs as these, once necessitated by circumstances, are now obviously inappropriate.

Certain habits, however, are regulated with good taste and delicacy of feeling, and the failure to adopt them argues a lack of fine perception or social insight. One of these is eating or drinking audibly. No sensitive person can hear any one taking his soup, coffee or other liquid, without positive annoyance. Yet those who would be very unwilling to consider themselves ill bred are constantly guilty of such breaches of politeness. The defect is that they are not so sensitive as those with whom they come in contact. They would not be disturbed by the offence; they never imagine, therefore, that any one else can be. It is for them that rules of etiquette are particularly designed. Were their instinct correct, they would not need the rule, which, from the absence of instinct, appears to them irrational, and purely arbitrary. To rest one’s elbow on the table is more than a transgression of courtesy, it is an absolute inconvenience to one’s neighbors.

All awkwardness of position, such as sitting too far back from, or leaning over the table, are reckoned as rudeness, because they put others ill at ease through fear of such accidents as are liable to happen from any uncouthness. This and kindred matters are trifles; but social life is so largely composed of trifles, that to disregard them wholly is a serious affront. We can hardly realize to what extent our satisfaction of dissatisfaction is made up of things in themselves insignificant, until their observance or nonobservance is brought directly home to us. —Scribner’s Monthly, 1875

Etiquette Enthusiast, Maura J Graber, is the Site Editor for the Etiquipedia© Etiquette Encyclopedia
Posted by Etiquipedia at 11:55 PM