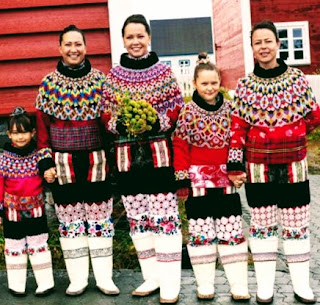 The courtship and marriage customs among the Greenlanders were in early times, simple and unceremonious. When a lovelorn youth made up his mind as to the girl he wanted to adorn and be useful in his hut of ice or snow, he went to her house and dragged her forcibly to his own domain, where she was expected to stay without any further marriage ceremony. If an affluent bridegroom, he would perhaps soothe her lacerated feelings by presenting her with a new lamp or some other article of household utility.

No matter how willing and even eager the bride was to marry a young man, Eskimo etiquette demanded that she should resist every attempt to drag her to her new home, and she must weep and wail bitterly once she was there. Indeed, she must continue to weep and wail for some days, run to her own home, only to be dragged back again. It is said that this extremely simple marriage ceremony is the only one still in use on the east coast of Greenland, and the laws governing divorce are as informal as the laws of marriage. – Los Angeles Herald, 1919

Etiquette Enthusiast, Maura J. Graber, is the Site Editor for the Etiquipedia© Etiquette Encyclopedia
Posted by Etiquipedia at 6:16 PM