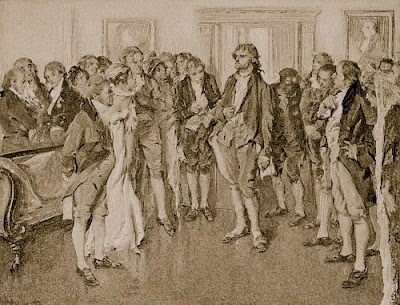 The new British diplomatic representative to the United States, Anthony Merry, and his wife were shocked and insulted when the president received them in worn clothing and slippers. In December 1803 at a formal dinner in the White House, no one offered to escort Mrs. Merry to dinner. In the dining room, Merry and his wife had to scramble for places at the table in competition with the other guests. Others had the same experience. Read more on Jefferson’s “Pell-Mell Etiquette” on Etiquipedia©


The habits of the last century in respect to decorum were just receding ; men were — for better or worse — ceasing to occupy themselves about peronal externals, and the customary suit of solemn black was only just coming into vogue. The old regime was dying, and its disappearance was as conspicuous in England as in France, in America' as in England. This is easily illustrated. If we were to read in some old collection of faded letters a woman's animated description of a country visit paid to one who seemed the counterpart of Addison's Sir Roger de Coverley, we should naturally assume that the date and address of the letter must be very far away in space and time.

Suppose that the narrator should tell us of a fine country house, surrounded by lofty elms forming two avenues, the one leading to the high road, the other to the village church. There are family portraits in the hall, a book-case containing the first edition of the Spectator, and a buffet of old plate and rare china. The guest remains over Sunday, and her host, wearing wig and cocked hat and red cloak, escorts her down the avenue of elms through the rural churchyard to the village church. At every step they pass villagers,who make profound obeisance, and at the conclusion of the service the whole congregation remains standing until this ancient gentleman and his friends have passed down the broad aisle. Who would not fancy this a scene from some English hamlet in the days of Queen Anne? Yet it all look place in the present century, and in the quiet village of Harvard, Massachusetts, little more than thirty miles from Boston, and now only noted as the abode of a little Shaker community and the scene of Howell's "Undiscovered Country."

The narrator was the late Mrs. Josiah Quincy, and her host was Harry Bromfield, elder brother of the well known benefactor of the Boston Athenaeum. He was simply a "survival "of the old way of living. He spoke of State Street as King Street, and Summer Street as Seven-Star Lane, and his dress and manners were like his phrases. Such survivals were still to be found, here and there all over the country, at the precise time when Jefferson became President, and shocked Mr. Merry with his morning slippers, and Mr. Sullivan by opening his doors to the world.

Thomas Jefferson's way of living in Washington exhitbited a profuse and rather slovenly hospitality, which at last left him deeply in debt. He kept open house, had eleven servants (slaves) from his plantation, beside a French Cook and Steward and an Irish Coachman. His long dining-room was crowded every day, according to one witness, who tested its hospitality for sixteen days in succession ; it was essentially a bachelor establishment, he being then a widower, and we hear little of ladies among its visitors. There was no etiquette at these great dinners ; they sat down at four and talked till midnight.

The city of Washington was still a frontier settlement, in that phase of those outposts when they consist of many small cabins and one hotel, at which everybody meets. The White House was the hotel ; there was no "society" anywhere else, because nobody else had a drawing-room large enough to receive it. Pennsylvania Avenue was still an abyss of yellow mud, on which nobody could walk, and where carriages were bemired. Governor Morris, of New York, described Washington as the best city in the world for a future residence. " We want nothing here," be said, "but houses, cellars, kitchens, well-informed men, amiable women, and other little trifles of this kind, to make our city perfect." -T. W. Higginson, in Harper’s Magazine, 1884

Etiquette Enthusiast, Maura J Graber, is the Site Editor for the Etiquipedia© Etiquette Encyclopedia
Posted by Etiquipedia at 7:02 PM