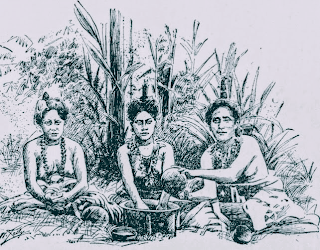 All that is necessary to satisfy the dictates of Samoan etiquette is for the principal guest of the occasion to drink the kava, the rest being at liberty to partake of it or not, as they choose.

One of the queerest customs of the gentle Samoans was the cause of a great deal of embarrassment to a party of San Franciscans a short time ago while the tourists were sojourning in the sunny land made famous by the pen of Robert Louis Stevenson. When a person of more than ordinary importance is entertained by a Samoan chief it is the invariable custom to periorm the sacred ceremony of chewing the kava and offering the liquid to the guest of honor. When the party is seated in the chief's abode three or four of the prettiest girls in the village are called into the room and seated tailor-fashion in a half-circle facing the one who is being entertained. All being ready, the chief hands each of the girls a quantity of kava nut, a product of the island much resembling the betel nut, and they fall to chewing them with all the energy of strong jaws and perfect teeth. This operation is repeated again and again, until a sufficient quantity of the kava has been accumulated. Then water is brought in and the juice diluted until it suits the fancy of the chief.

Only unmarried women are permitted to chew the kava nut, the Samoan belief being that unless masticated by virgins the nut loses its best properties. At last the brew — if such it may be called — is ready, and the chief takes up a quantity in a cocoanut-shell cup and hands it to the guest of the occasion. Woe betide him if he refuses it, for this is the most serious breach of etiquette that can happen in a Samoan household, and should the cup not be drained to the last drop the taboo is put upon him from that moment. The guest must drink with as much decorum as the chief employs in passing the cup. The effect of kava is as queer as the method of preparing it. The first drink produces no effect beyond, perhaps, a natural nausea, but the second and third are more potent. The liquid is imbibed sitting tailor-fashion on a mat, and after the third cup, the guest, unless of unusual strength, finds it impossible to rise. The brain is as clear as though the liquid had been pure water, but, from the waist down, the body seems to be paralyzed, and the guest must of necessity sit and wait for the effects to wear away unless helped to some other posture.

The girls who chew the nut are not in any way inconvenienced by it, because they do not swallow the juice, and they often appear to enjoy the predicament of those who try vainly to rise from their lowly seats. All that is necessary to satisfy the dictates of Samoan etiquette is for the principal guest of the occasion to drink the kava, the rest being at liberty to partake of it or not, as they choose. The liquid tastes and looks like nutmeg water, though a flavor of soap is often detected by those who partake of it for the tirst time. – San Francisco Call, 1897