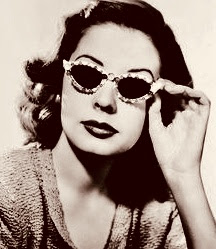 In Hollywood’s Golden Age, quickie divorces in Nevada were almost de rigeur. To fill the need of stars, starlets and socialites, luxury “Divorce Ranches” sprung up in the state, so that one could fulfill a six-week residency there, before getting a divorce granted. From the 1930s to the early 1960s, Nevada (Reno, in particular) earned the distinction of being the divorce capital of the United States, and those presiding over the courts were alarmed at the frequent lapses in the dignity and etiquette of their courtrooms.

LAS VEGAS, Nev., Sept. 18 – Movie stars and socialites who stream to this desert resort to shed their husbands were warned today to conduct themselves like ladies in divorce court. Judges A. S. Henderson and Frank McNamee, alarmed at frequent lapses in dignity of their courtrooms, placed an especial taboo on dark glasses, the traditional Hollywood disguise.

“The light in the courtroom is not of sufficient strength to bring discomfort to the eyes,” they ruled. They also banned bare midriffs,slacks and shorts. “No epidermis, except that ordinarily exposed to public view by discreet citizens, will be allowed to be displayed in the courtroom,” they said. The bailiff was instructed to “dispense with leniency in enforcing fundamental rules of etiquette and good behavior.” – San Bernardino Sun, 1946

Etiquette Enthusiast, Maura J Graber, is the Site Editor for the Etiquipedia© Etiquette Encyclopedia
Posted by Etiquipedia at 5:50 AM