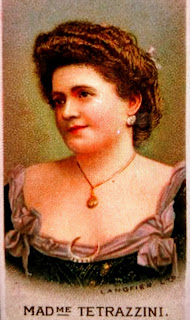 An Italian coloratura soprano of great international fame, Madame Tetrazzini's voice was remarkable for its phenomenal flexibility, thrust, steadiness and thrilling tone. She enjoyed a highly successful operatic and concert career in the U.S and Europe, from the late Victorian Era to the 1920s.


In her last year of residence in America, Madame Tetrazzini, has added much to her English speaking attainments and she now acquits herself delightfully in general conversations. She is persistent in using English words and when these fail her, her dramatic art is brought into use and she acts out the word. As we pulled into the station on the way to Los Angeles the bell on the engine clanged monotonously and she was reminded that in Italy the bells hang in church towers, "We have no bells on our trains there,” she said, "but only" and then the word "whistle," not coming readily to her tongue, she puckered up her lips and emitted a low, melodious imitation of a train whistle.

Describing her Continental experience last summer the diva mentioned her singing at the opera during the coronation ceremonies in London, She described the wonderful floral decorations of the theater itself and then the astounding display of jewels as they appeared upon English royalty and the men and women representing the foreign courts during that remarkable pageant. The jewelled headresses of the Indian princes, Maharajas and other notables received vivid description from the singer and then she alluded laughingly to the incident of her own appearance when despite Court decorum and in defiance of rules of etiquette, the King and Queen clapped their hands enthusiastically and brought forth a demonstration of applause otherwise unheard of in that performance. Madame Tetrazzini explained that applause on such grand occasions is not customary and occurs only when led by the members of the royal family, so that her ovation earned an extra fame for her. “They said I had a wonderful claque,” said she, "with the King of England to lead it.” – Los Angeles Herald, 1912