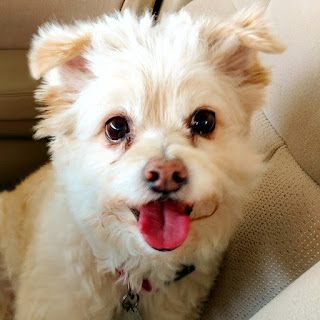 A reminder to the dog owner who doesn't think enough of his pet to train it properly, that he’d better keep the little chap on his own premises (or car, as the case maybe) until he can teach him sidewalk decorum.

In Denver, Colorado, a grocer, who knows both dogs and human beings, installed hitching posts for dogs outside his store. He put leashes on the posts long enough so the dogs were comfortably tethered, but short enough so they couldn't get near enough to each other to scrap. And he put locks on the leashes, so that fine breeds, as well as mutts, would be safe while their owners shopped. That grocer must have pleased many citizens who owned dogs and a great many more who didn’t. For however much we love our dogs, they don't belong in grocery stores, nuzzling the fruits and vegetables and shedding hair indiscriminately, however unintentionally.

In New York, and unfortunately in only a very few other cities, street signs warn strollers, “Curb Your Dog.” It is a reminder to the owner who doesn't think enough of his pet to train it properly that he’d better keep the little chap on his own premises until he can teach him sidewalk decorum. A cleaner, pleasanter community might result locally if such hints were to be taken seriously here. And if organizations in putting our best foot forward both for the benefit of local folk and for visitors among us, don’t push the idea as a good one, we'd be surprised. – Sausalito News, 1941

Etiquette Enthusiast, Maura J Graber, is the Site Editor for the Etiquipedia© Etiquette Encyclopedia
Posted by Etiquipedia at 1:32 AM