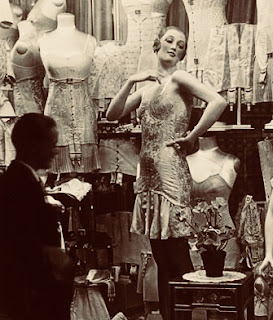 1930’s photo of young man in Paris, eyeing a mannequin in lingerie... “Vice is overindulgence. Drinking too much water can be a vicious habit. Sex is only vicious when it is commercialized.” – Morals Watchdog, S. Sumner, secretary of the Society for the Suppression of Vice  (photo source, Pinterest)


One of the most curious aspects of civilization, dating back for thousands of years, is the appeal of the “dirty,” or pornography. Different things have been held immoral at different times. What were ordinary topics of conversation in Elizabethan times are today considered obscene, and some of the ordinary aspects of modern life would have shocked those gusty old-timers considerably. Fashions in obscenity change just as do fashions in houses, clothes or manners, except that they take longer. Just why something should be considered bad at one time and not another, is hard to say.

To early peoples things existed or were not thought about; there was no conception of anything as obscene. That was an invention of civilization, and a sad commentary on the civilized mind. One of the curious phenomena about the matter is the development of the watchdogs of our morals, who form societies, organizations and the like. While such constant preoccupation with obscenity and vice seems strange to the average person, there is no doubt that they do considerable good in keeping the law enforcement agencies on their toes in protecting our children from commercial pornography.

S. Sumner, secretary of the Society for the Suppression of Vice, is an outstanding example. He approaches the problem from the legal viewpoint rather than the moral, and hence gets remarkable results. “Vice is overindulgence,” according to Sumner. “Drinking too much water can be a vicious habit. Sex is only vicious when it is commercialized.” One question usually embarrasses him, and that is what the effect of investigating so much that is “dirty” has been on him. Obviously, if it hasn’t affected him, then a morals censor is not needed, and if it has, he is no man for the job. But he is a good man for the job, as his record of convictions attest. Nobody wishes to prepare for war. But next thing, there may not he anybody to hold the cyclone till we get a cellar dug. - San Pedro News Pilot, 1938

Etiquette Enthusiast, Maura J. Graber, is the Site Editor for the Etiquipedia© Etiquette Encyclopedia
Posted by Etiquipedia at 5:00 PM