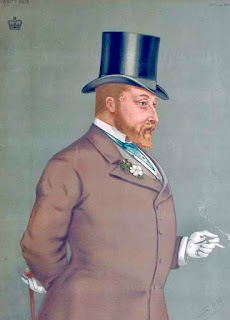 Bertie was, according to Professor Jane Ridley, “the first English Prince to visit Jerusalem since Richard the Lionheart, but he got on much better with the Muslims than the Crusader did.” –
Nearly 40 years prior to becoming King Edward VII, young Prince Albert, known as Bertie, was sent by Queen Victoria on a Royal tour of Egypt and the Holy Places of Palestine and Syria.This trip became the template for the British Royals and tours we know of today, not least because it was the first that the people could actually see as an official photographer, Francis Bedford, accompanied the Prince. While on the tour, in a move that even today’s Royal Princes might consider a step too far – Bertie got a tattoo on his forearm  – five crosses forming a Crusader’s Jerusalem cross.

The order issued by the King of Great Britain for his first entry into Parliament includes a requirement that women participating shall wear dresses cut low. The affair will take place in the afternoon. The order must, therefore, shock the American flunkies, who maintain that a swallow-tail coat and a low-necked gown must never be worn before 6 o'clock, summer or winter. There are men and women who profoundly wish that neither a swallow-tail coat nor a low-necked dress should ever be worn, with an exception in favor of cutting out the dress bodice modestly for coolness in the heated term. The objection to the Royal and Imperial British order for low-necked dresses when the Emperor of India opens the houses of Parliament is, however, purely humane.

Every woman who can will endeavor to be present on so exciting an occasion. The order is absolute as to exposure of the shoulders and bust to winter weather, whatever it may be that day. Pneumonia is as prevalent in London as in Chicago, perhaps more so. The doctors will have a profitable increase of business following the day the Emperor of India appears before Parliament. Nor should the new Monarch be hastily censured for this barbarous ritual. He has said that he will follow the steps of the late Monarch, who never relaxed or suspended this rule at her drawing rooms, always held by day, and always the cause of serious illness, with their full proportion of consequent deaths. This is one of the objects for which Monarchies are maintained — to thin out the population.— Chicago Chronicle, 1901

Etiquette Enthusiast, Maura J. Graber, is the Site Editor for the Etiquipedia© Etiquette Encyclopedia
Posted by Etiquipedia at 10:19 PM