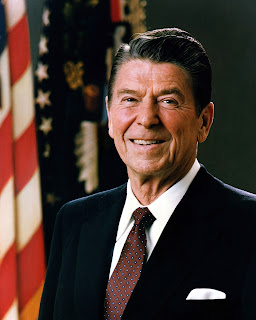 “I know in my heart that man is good. That what is right will always eventually triumph. And there's purpose and worth to each and every life.” Ronald Reagan  – Politically, Ronald Reagan’s looks and acting experience gave him an edge, whenever he was on television. Statesmanship requires good manners and tact, and both were qualities that Reagan exuded. He conveyed a quality of leadership that brought people together naturally.


Looking at Looks and TV Manners

Republican gubernatorial contender George Christopher challenged his GOP rival, actor Ronald Reagan, to a television debate on the issues, even though, he said, he might be, “at a disadvantage esthetically.” His attractive wife, Tula, promptly disagreed, saying “George is much better looking than Mr. Reagan.’’ Reagan himself, formally announced his candidacy in a TV appearance on 15 stations, thus cutting himself off from television revenues for the duration of the campaign.

Most everyone remembers the TV battle of Richard Nixon and the late President Kennedy. The question of appearance and TV manners played an important part in the campaign. Everyone agrees that political contests should not resolve themselves into TV beauty contests or depend on a candidate’s ability to play the banjo or piano, but what is happening? There is no question but that we should take a good look at a candidate’s record, ability and reputation, but we are more apt to look at his looks.– LaHabra Star, 1966