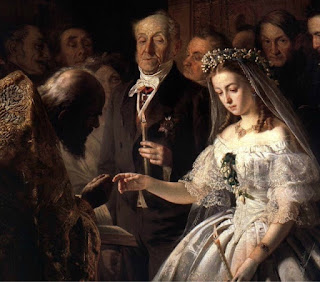 Not proper? “It’s not true that white is improper for a second wedding, say etiquette experts, however a veil symbolizes maidenhood, and is taboo for a second marriage.”

The divorcee or widow who marries for the second time, often faces many taboos. Take the matter of the white dress. It’s not true that white is improper for a second wedding, say etiquette experts. The custom of a white dress has its origins in economics. In early Saxon days, the poorer bride dressed in a plain white robe to show that she brought nothing with her to her marriage. This indicated that her husband was not responsible for her debts.

Although there is no restriction against wearing white, the bride’s choice should be based on comfort. If she feels more comfortable in an off-white shade or pastel she can select beige, pink, blue, green or whatever is most becoming.

The gown should be ballerina or street length, and instead of a veil, a small flower hat, a cap or a head dress complimenting the gown may be worn. The style of the gown is determined by the time of day of the wedding, but shoulder and upper arms should be covered. If the bride wears an after-five or dinner dress, the maid of honor and bridesmaids should dress accordingly. It is better to wear a suit or simple street dress if the wedding takes place at the pastor’s home, say the experts.

Guests are not obliged to present a gift to the previously married bride, but most will. If you have been a widow or divorcee for a long time, you may invite to the wedding both families, as well as close friends, on both sides.

Etiquette does not determine whether children of a first marriage should be present for the second wedding. The choice is up to the engaged couple. –Chicago (UPI) News, 1963


Etiquette Enthusiast, Maura J. Graber, is the Site Editor for the Etiquipedia© Etiquette Encyclopedia
Posted by Etiquipedia at 2:24 AM