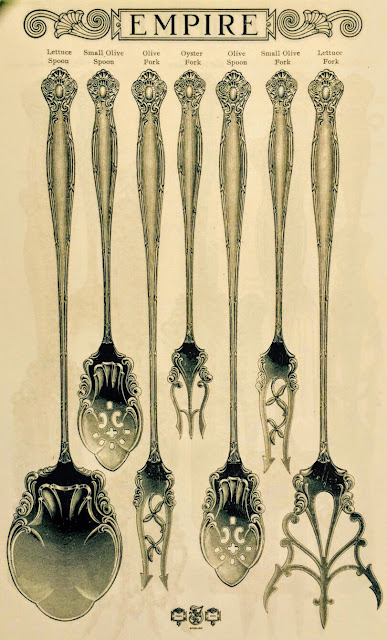 Originally, long lettuce forks and matching spoons were the proper accoutrements for serving salads in the late 19th and early 20th centuries. Eventually, by the mid 20th century, they became connected, made of plastic and mass marketed as “salad tongs,” though those who took much pride in entertaining, continued to use separate salad serving forks and spoons to serve their guests leafy, green salads.


To paint a complete portrait of the restaurant’s history, the iconic image of Man Carving a Roast should be accompanied by Man Mixing a Salad. For in haute restaurant-ology it is Man, not Woman, who rules the salad bowl.


In the 19th century wealthy men who styled themselves epicures often impressed their dining companions by rising from the table and mixing the salad. In the 20th century the custom passed into the hands of headwaiters at chi chi venues.

The tradition can be traced to peripatetic Frenchmen who wandered around Europe solemnly ministering to urban dinner parties with the contents of their small yet sacred chests of salad ingredients which included flavored vinegars, soy, caviar, truffles, anchovies, and other delectables.

In the 18th century sallad (spelled in the British manner) referred to a mixture of greens and herbs, possibly radishes, dressed with vinegar and oil and perhaps a raw egg. It could also mean chopped cabbage, known in the early 19th century as “cold” slaw. How many taverns, coffee houses, and other early eating places served salads is unknown but the number was probably very small and their salad days limited to springtime.

Although some green salads appeared on 19th century menus, the word salad more often referred to cold chopped meat or fish dressed with mayonnaise. Lobster and chicken were favorites. Combination salads and fruit salads did not come into popularity until the 20th century, largely due no doubt to the lower price of greens, vegetables, and imported bananas and pineapples.

The type of restaurant that did most to advance the green salad as a basic component of the American diet was the table d’hôte, a small French or Italian restaurant serving a fixed-price meal of about five courses. In 1844, patrons at the Café Tortoni in NYC enjoyed dinners of soup, stew-like entrees, roast meat, salads “mixed a la des Jardins,” and desserts. Head lettuce was rare, so typical salads featured romaine, chicory, dandelions, or field greens. Salad lovers particularly lauded Italian restaurants for their salads, both in the 19th and 20th centuries (despite the common appellation “Wop salad” ca. 1940-1970). In 1909 a patron wrote that Italian restaurant salads “are almost always good, and the dressing, made from red wine vinegar, is usually delicious. The mixed salad, in spring includes tomatoes, peppers, lettuce, celery, sometimes spinach and usually chives. Beet tops are also served as salad.”

In the New England countryside, on the other hand, salads were rare – and unsatisfactory. As a patron in a hotel dining room noted in 1881, “If by any chance there is lettuce on the table – for this happens rarely – and you manifest a desire to eat of it, the waiter puts before you the vinegar cruet and the sugar bowl. If you want to make a fool of yourself, call for salad oil. It will take some time to explain your meaning, and when you have done so the attendant will sneeringly inform her companions that ‘That feller eats grease on his lettis.’”

Although some thought salads were gaining popularity in the 1890s as sedentary city dwellers woke up to the wisdom of lighter fare, hotel cook Jessup Whitehead remarked in 1901 that “salads are not among the common popular dishes, and the average public seldom seems to think of them.” Many cooks had no idea how to prepare them, he added.

Salads became feminized in the 1920s. Perhaps it was the popularity of fruit salads in tea rooms, or the increasing use of flavored gelatin salads, but some male gourmets denounced women for preferring “comic salads” chosen for eye appeal rather than taste. Indeed there were some bizarre ones such as the Candlestick (illustrated), and others with names such as Clara Barton, Bon Ton, Butterfly, and Martini. Even a female tea room proprietor had to admit that “Atrocities have been committed in the name of salad.”

In the mid-20th century the tossed salad smothered under a layer of thick dressing became the standard start of a regulation meat and potatoes restaurant dinner. The high incidence of mediocre salads led syndicated columnist Inez Robb to launch a one-woman campaign in the 1960s against the two-pronged “red menace” to restaurant salads: chopped red cabbage and sludgy red-orange “French” dressing. Relief was on the way, for in the 1970s field greens returned, and ingredients rarely (but sometimes) found in salads of previous decades, such as olive oil, radicchio, and arugula came into wider use.–© Jan Whitaker, 2011

We wish to thank Jan Whitaker for her allowing us to use another wonderful post from her blog. Says Jan, “We eat in restaurants several times a week and yet know very little about their history. I plan to dip into my archive of research and images every so often to present a little tidbit that highlights aspects of our American restaurant culture. Let me know your thoughts”- Restaurant-ing Through History