Etiquette and the Homburg Cure 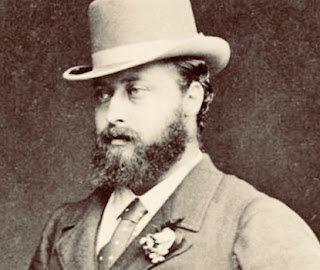 Bad Homburg vor der Höhe, is a former royal spa in Germany. Today it continues to offer traditional health treatments, rest and rejuvenation. The drinking of the water is the great feature of the cure at Homburg, but bathing is also employed. Edward VII was often a guest. It was he who introduced the Homburg hat and permanent turn-up trousers. He underwent fasting cures at Homburg 32 times. “The Prince of Wales takes his cure like a little man, promising himself, no doubt, that there is a good time coming. It takes a close observer to detect in him the slender boy who visited us in 1860. He is not tall, and is stout, and wore in the park at Homburg a suit of the color of a cinnamon bear, a calico shirt, red cravat, untanned leather shoes, soft brown hat, with a broad figured ribbon, carried a stick, and was followed by an Esquimaux dog, white as snow and too dignified to wag his tail.” – 1887

Albert Edward and “The Cure” at Homburg

People do not get introduced to the Prince of Wales at Homburg through running after him. The etiquette of the place is not to notice him. Not one person in a dozen who passes him on the walks even looks at him. His face is as familiar as that of one of the trees in the park, and makes no sensation. “The cure” at Homburg is an exciting business. One must be up at 7 in the morning at latest, and the usual course is to take one glass of water from the favorite spring at 7 o'clock and walk for a quarter of an hour ; then a second glass and a walk for another quarter of an hour ; a third glasa and a walk for an hour. This brings breakfast time, and one is allowed for breakfast two eggs and one cup of coffee without milk or sugar. After breakfast, bathe in a decoction of pine leaves. Luncheon at 1:00, two glasses of water and an hour’s walk from 4 to 5 ; dinner at 6:00, and the fashionable hour to retire is 9. There are no sauces or uncooked vegetables; no raw fruit or salads or wine, except a little hock, permitted. One who keeps this up for three weeks is believed to get the full benent of “the cure,” and to be ready for another season of pleasure or hard work.

The Prince of Wales takes his cure like a little man, promising himself, no doubt, that there is a good time coming. It takes a close observer to detect in him the slender boy who visited us in 1860. He is not tall, and is stout, and wore in the park at Homburg a suit of the color of a cinnamon bear, a calico shirt, red cravat, untanned leather shoes, soft brown hat, with a broad figured ribbon, carried a stick, and was followed by an Esquimaux dog, white as snow and too dignified to wag his tail. The Prince generally walked with a rush, as if he had a severe duty to perform and meant to set through it, and he was always accompanied by a lady, usually some one else's sister, occasionally his own sister, the Princess Christian. He was not an obtrusive person, and there were no ceremonies about, only he was allowed to go about his business, having for the time the coveted freedom of a private citizen; and those who met him said he seemed to be a companionable man, who asked many questions with much intelligence, and did not have to have many jokes explained to him. If he desires to form an acquaintance, we presume his overtures are rarely declined.

We are not aware that the American minister has recorded a “reverence” for the Prince. He often meets the Prince, and testifies to his good fellowship. The Prince told him that he was anxious to meet Mr. Blaine, and when he did meet Blaine he wanted to see him again. The Prince of Wales possesses points of peculiar interest. He may very soon be the King of Great Britain and Ireland and the Emperor of India. But he is not playing the despot. He is as careful in the cultivation of the arts of popularity as if he were a candidate for the Presidency. He is one of the closest students of current history, and he is much of the time very laboriously engaged in public duties, many of which are thrown upon him by the widowhood and infirmities of his mother. He has made it a point to be polite to Americans. Is that the reason why he should be particularly obnoxious to us? It is not bad policy to cultivate pleasant relations with the other English-speaking people?

The education of the Prince, as the Prince, has of course been a detriment to men, for royalty is a sham that must pass away. But few men know so well the weakness of it as the Prince of Wales. He is a very good public speaker, and there are many of his speeches that could not have been written for him and memorized. Those who know him say he speaks very well indeed, and he has a manly voice, and his universal reputation is that he is gifted in tact, and that he is good humored and studious to please. He is a great improvement on the run of Princes of Wales, and should have credit for it. – Cincinnati Commercial Gazette, 1887


Etiquette Enthusiast, Maura J. Graber, is the Site Editor for the Etiquipedia© Etiquette Encyclopedia
Posted by Etiquipedia at 3:03 AM