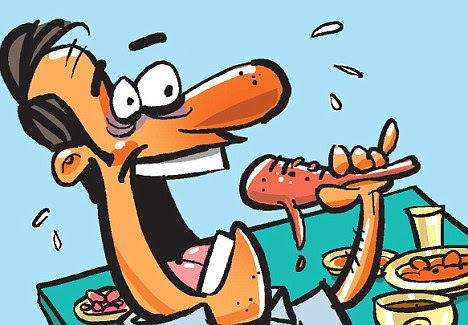 “I would tinker with all the different instruments arrayed on the tablecloths: the knives, the forks, the completely round spoon that was only for soup, the funny-shaped spoon for the slab of ice-cream, and so on.” – Ruchir Joshi

In the middle-class Indian household in which I grew up, the dining table was a relatively new thing. Visiting my parents' families in Ahmedabad, I sat cross-legged on the low wooden paatlaa for my meals like everyone there.

At home, at the dining table, we replicated what I would call basic South Asian rules of eating with the hand, always using the right hand and never the left, of jhootha and clean, etc... The only implement used at our table was the spoon in various sizes. It was only when we made the rare visit to restaurants that other cutlery came into play. Here, fascinated, I would tinker with all the different instruments arrayed on the tablecloths: the knives, the forks, the completely round spoon that was only for soup, the funny-shaped spoon for the slab of ice-cream, and so on.

At some point, at my parents' bidding, a friend of theirs, P-Mama, coached me in the correct method of using a knife and fork: elbows always away from the table, hold the knife and fork at right angles, use the fork to keep the target bite of omelette or cutlet in place while the knife severs it from the main body of the dish; tilt the soup bowl away from yourself and spoon up the soup, again, always away from yourself, but do the opposite with other spoonable matter; always squash the peas against the back of the fork so that they didn't roll away; keep knife and fork crossed on plate if you are only pausing during eating, and parallel and close together if you have terminated your meal or that particular dish, and so on and so forth.

Because table and cutlery manners were embedded in a continuum of gracious behaviour, along with this training came a lecture on the use of bad words. 'I was once at meeting with my business collaborators in London,' P-Mama recounted, 'and I used the word 'damn'. My opposite number immediately got up from the table and called a break, "Mr P you are clearly upset. Let's meet after lunch." and I realised my mistake.'

Reaching America as a college student, I quickly grasped that for every set of rules created by western society there existed an exact opposite set of behaviours. Students in my college canteen used the fork in their right ha nd, rarely used the knife, used the fork to throw food at each other and their hands to throw peas. They also used a lot of bad words, epithets much further down the civilisation chain than the demure 'damn' that had got P-Mama into such trouble in those ancient British times. After college, working as waiter in a posh singles bar and restaurant in New York, another set of 'manners' came into play, from bantering with customers, (but only up to a strict, invisible line) to accepting or refusing politely when you were offered a line of cocaine under the table.

Afterwards, it was the tip the table left you that mattered and not the hieroglyphic mess of cutlery scattered here and there. Moving into different cultures, one understood that table manners were complex and shifting things. It was better not to use chopsticks in a Chinese or Japanese restaurant if you weren't adept, and certainly not cool to make slant-eye jokes while fiddling incompetently with the damn things. The French always immediately put their napkins on their laps while Anglo-Saxons tended to wait till the food was served. Continentals would use the table-cloth to break bread and use their hands to eat it, both a complete no-no with P-Mama who took a long time to show me how to slice a bread-roll in half, butter it and put it back together again, with minimum use of fingers.

Then came the actual experience of another truism one had only read about: the more 'aristocratic' you were, in England, the worse you behaved at table, the 'better' you behaved at table the more you gave away your aspirant class. This reminded one of the old story about how it was once highly impolite in exalted circles in China to do anything but throw your bones and other foodly rejections over your shoulders - to keep stuff neatly on a plate implied the host was too poor to employ a vast army of servants to clear up after his guests. Coming back full circle, a few years ago, I found myself tagging along with a friend for dinner at a Spanish woman's house in Jorbagh. As we sat down for aperitifs, the lady launched into a diatribe about how she couldn't stand this Indian business of eating with the hands.

'Barbarians!' she exclaimed, completely oblivious, or perhaps not, of my presence in her living- room. For a moment I contemplated vicious retaliation: I would eat each thing this cretinous senora served at dinner, but only with my hands, making the most outrageous slurping sounds as I did. As it is, I suddenly remembered a phone-call I was about to receive on my land-line and left the party, leaving my friend, a Frenchwoman, to berate her host for her insulting comments. I remembered this when I read recently about the Indian couple whose children were taken away by the Norwegian authorities. Later, other factors came to light, but we all shared the initial outrage when reading that the kids had been taken away because they were being taught to eat with their hands.

The other day, I ate an Indian meal with an English friend. Like most of the British public, my friend is more than happy to tuck into desi khana, pizza, sandwiches and, yes, Spanish tapas with his hands, and he rapidly got busy attacking the dal, chicken and sabzi laid before us. I started eating and then noticed the strange contortions my friend was making with his fingers, as well as the awkward combinations of knife, fork and naanas- implement to get at his food. For a brief second I felt like giving him a demo-lecture on how desi food needs to be eaten (and yes, in these modern times, eaten with both hands fully deployed) but then I did away with my discomfort. I remembered, once again, that genuine manners, especially table manners have to do with two basic things.

First, you want to avoid inciting repulsion and disgust in the people around you, wherefore the edicts against eating with your mouth open, burping and slurping, dribbling sauce down the side of your mouth and so on. Now, disgust is a highly context-driven thing. My vegetarian mother, for example, could not bear watching a person tear into a tandoori or barbecued chicken, mining the bones for little treasures of meat as proper non-vegetarians do.  Some European aristocrat, on the other hand, might not be able to stomach the sight of a desi sucking on drumsticks or licking their fingers clean of dal. So, a good idea is to more or less stick to what will cause minimal discomfort to the audience of your meal-taking, but within the cultural context of the meal. Second, and equally if not more important, is the role manners play in putting the other person or people around you at ease.

Food, essentially is about nourishment, and this nourishment best takes place when the eater is relaxed and un-fussed about his or her ingesting environment; duty meals are among the most stressful rituals that humans put themselves through.  If we follow this basic doublesided principle - while eating, put others at ease and protect your own - we should be able to eat as we like, using the fish knife for buttering, using the fingers for tearing the steak and the coffee spoon for stirring the tea. – Originally published by Mail Online, March 2012, written by Ruchir Joshi

Posted by Etiquipedia at 5:50 PM