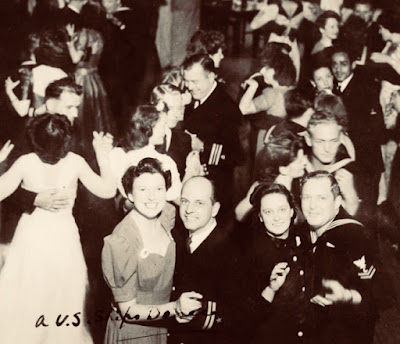 United States Navy sailors and their partners pose for a photo while dancing at the Majestic Cabaret in Wellington, circa 1942.– New Zealand History

When American troops were stationed in New Zealand during the Second World War many young women were bowled over by their suave manners, which contrasted with the less polished advances of New Zealand men. Americans brought presents such as flowers and candy, whereas New Zealand men arrived empty-handed and expected their dates to pay their own way.

One woman later remarked that American men 'gave us the gentle, careful attentions that we were starved of, and moreover did it in a way that made us expect more of our boys when they came back. A good many of them, sensing comparison with American manners, had to pull their socks up.’ – Quoted in Lauris Edmond, ed, Women in Wartime: New Zealand women tell their story. Wellington: Government Printing Office, 1986

Etiquette Enthusiast, Maura J. Graber, is the Site Editor for the Etiquipedia© Etiquette Encyclopedia
Posted by Etiquipedia at 1:21 AM