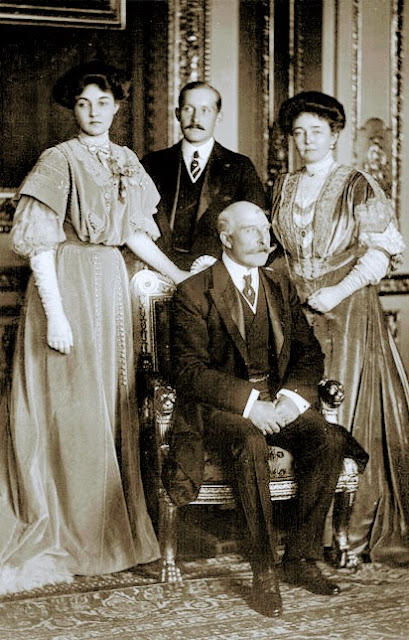 The Duke and Duchess of Connaught with Princess Patricia and Prince Arthur.

WASHINGTON, Jan. 24.—Arrangements for the reception tomorrow of the Duke of Connaught were completed by the White House and the State Department tonight. The uncle of one King, and brother of another, will be received as simply as is consistent with etiquette. As the Duchess and the Princess Patricia will not visit Washington, the Duke will go through the program aranged for his reception unsupported, except for the British ambassador, James Bryce, the staff of the British embassy and his personal aide, Colonel Lowther. Altogether his stay in the capital will be brief, and during most of his six or seven hours in Washington he will be on home territory within the acre or two covered by the British embassy.

According to the announcement given out at the White House the Duke will arrive in Washington at 4:20 tomorrow afternoon. Major A.W. Butt, personal aide of President Taft, will meet the Duke at the Union Station and with the British ambassador and the embassy staff will form his escort to the embassy. At 5 o'clock, the Duke is expected to reach the White House. He will be led away from the embassy in a White House motor, accompanied by a squadron of cavalry. The cavalry will form an escort of honor to the portico of  the executive mansion and will deploy on the driveway in front, while he enters to be received. In front of the porte-cochère the Fifteenth Cavalry band will be stationed and as the Royal visitor enters it will play “God Save the King.”

The Duke will be received by President Taft in much the same way as new ambassadors are received. As he enters the executive mansion he will be met by the military and naval aids of the President and escorted to the Green Room and then taken to the Blue Room, with the British ambassador and Chandler Hale, third Assistant Secretary of State. He will be presented formally to President Taft by the British, ambassador. After the Duke is introduced his staff will be presented. After this, Mrs. Taft will serve tea for the Duke and the ambassador in the Red Room. Members of the cabinet and their wives have been invited to be present.

The Duke will leave the White House after this informal, reception is over, and the band outside will play “The Star Spangled Banner.” The squadron of cavalry will escort him back to the British embassy, and shortly, after he has stepped on British territory again, the President, accompanied by Major Butt, will return his “call.” So far as the government is concerned, this will end the Duke’s visit to Washington. Unofficially, it is known that afterward the Duke will be the guest at dinner of the British ambassador, and it is understood he will hold a reception for diplomats and government officials, but beyond his visit to the White House and the President's return trip, nothing was known tonight of the first visit of British Royalty to Washington in many years. – San Francisco Call, 1912

Etiquette Enthusiast, Maura J. Graber, is the Site Editor for Etiquipedia© Etiquette Encyclopedia
Posted by Etiquipedia at 12:51 AM