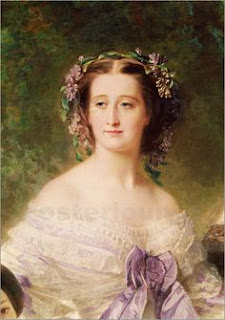 No suitable riding habit could be found for her in which to show herself on horseback to the troops and the populace... Empress Eugénie was the younger daughter of the Count of Montijo. She married Napoleon III in January 1853 and was Regent in the summer of 1870 when the Emperor was engaged in the Franco-Prussian war. After the battle of Sedan, when Napoleon III was captured along with his whole army, she fled to England with her son. –Image of Empress Eugénie from Pinterest

A Question of Etiquette in Paris

It has repeatedly been asked as to why the Empress, after the news of Sedan was made public, did not present herself to the guards and the people of Paris, and call upon them to rally around her and her son, and to maintain for the latter the Imperial throne. The cause of this singular abstention has been made public. It was because no suitable riding habit could be found for her in which to show herself on horseback to the troops and the populace.

There was only one to be found at the Tuileries in the hurry and confusion of that terrible crisis. It was one made for the hunting parties at Compeigne, and was in the Louis XV style, composed of green velvet embroidered with gold, and necessitating a cocked hat for completion of the costume. It was too theatrical. It would not do, and so the gallant appeal to the public was given up, and with it the last hope for the preservation of the Empire.—Paris Correspondence6 Philadelphia Telegraph, 1891

Posted by Etiquipedia at 3:56 AM