The Etiquette of Picnic Baskets

... and the Evolution of the Dinner Pail

Society has taken to picnicking. Like plain ordinary folks they suddenly found that a day spent in the woods was worth two in the house and with one accord are straightway contending with one another to see who can give the simplest, yet most elaborate luncheon. Strange as it may seem in this particular case, sweet simplicity and studied elaborations go hand in hand and for once make a mighty fine team. For the new dinner pail is a thing to rejoice exceedingly over, that is, this newest and this latest that has been especially concocted for those who are blessed with long pocketbooks, for verily they are brim full when entirely empty. There was a good old time when people didn't lose much sleep over the nature of the receptacle for their lunch. The main idea was that there should be plenty of it, and the plenty didn't signify, by the way, all sorts and conditions of delicacies and tempting bits, but just the very plainest kind of food.

But when the smart set took to spending days in the woods it meant that something was doing in the lunch line. And when automobile parties were made up right and left, there was felt the distinct need of a basket that could be tucked away out of sight and that would dispense with the thousand and one nuisances that have always been deemed necessary. When Mrs. Burton Harrison (nee Crocker) came out here on a jaunt, the very first thing she did was to send notes to her friends asking them to meet her in the morning and when the dozen or more arrived one at a time and in twos and threes, she promptly packed them into traps and invaded one of the pretty spots that are so numerous about Del Monte. For a whole day she had them to herself and they visited to their hearts’ content, every now and then stopping to refresh the mortal man. For while picnics are all right in their way it is what goes with them that has made them so terribly popular. However, as it happens, Mrs. Harrison didn't have to drop in here from Newport to start this round of outings.

Mrs. Will Tevis invited some London friends to visit Yosemite with her and in looking about for the necessary camping outfit, her eye fell upon what is termed the “automobile” lunch basket, and in an instant she grasped its possibilities. The largest, and the one she carried throughout the day, is a perfect basket. To all outward appearances it is an ordinary hamper, looking more like a steamer trunk than anything else, but just wait until that fastened cover is raised— a Jack-in-the-box couldn't or wouldn't surprise one more. All neatly folded and packed away are the requisites of a meal. On top is an oblong wooden piece that develops at presto! change! and a simple twist of the wrist into a table quite large enough for four. It stands in its braced legs that fold under it and is perfectly firm and substantial. That in itself seems to make everything comparatively simple; at least, there is a definite place to put things.

Just under it, the white and red tablecloths with the napkins are folded, and then the impromptu board is quite ready for active business. As the cover swings back on its hinges, leather straps keep it trom upsetting plates, cups and saucers, knives, forks and spoons, that fit and are strapped securely to their respective places. Inside the basket is divided into various compartments. For instance, one end contains a spirit stove over which swings and sways a brass kettle, the finest kind of a coffee brewer and the alcohol flask is near at hand, always ready to replenish. A heavy white jar labeled “butter” and another with “jam” on its cover match the tea, coffee, salt and pepper boxes to see that they don’t get into mischief, and the tin biscuit box is quite near enough to hear all the latest gossip about milady’s and milord’s table manners.

Education makes all the difference in the world, you know, and long before this high tone basket left the factory, it had lorded it over the lesser and plainer ones and given them lessons in all kinds of etiquette. Fancy the modest little 15-cent tin pail sitting meekly In the shadow of an “automobile” that brings half a hundred. My! What an opportunity to flaunt and frill and to put on airs gradually, yet when it comes right down to it the tin pail should have right of way; undeniably it was here first. The workingman probably needed a full pail first, and more than any one else, and he needed quantity and not quality. Nine times out of ten, a newspaper with four or five immense slices of bread, some boiled meat and a flask of cold tea was plenty good enough for him and he prided himself on getting out of carrying anything but the flask home. 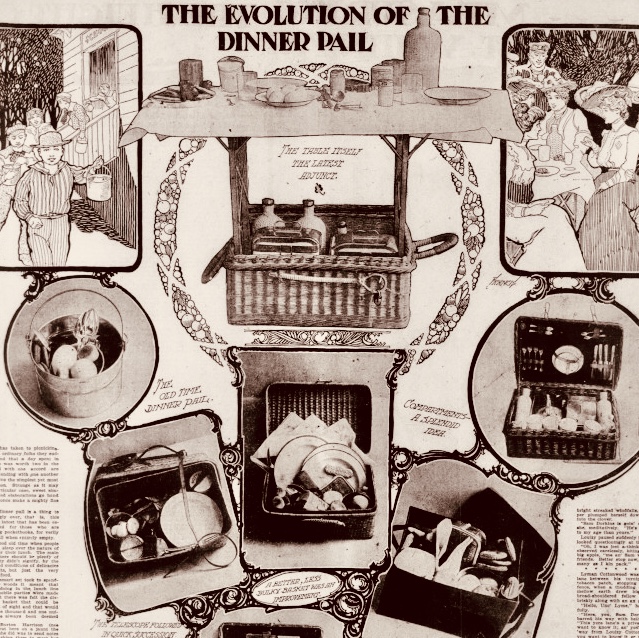 Next the school children, who rode several country miles to school, clamored for lunches and they demanded something that could be fastened on so they could go flapping along their way, running races and rejoicing generally. Necessity is the mother of invention, so Mrs. Rancher promptly converted the smallest lard pail that came into her hands into the needed article. If the pail weighed ten pounds, she wasn’t in the least daunted, and by the time she had cut it down, dressed it up with a new handle, it didn't know itself. The color didn't make any difference and the flaming red advertisement was allowed to stay where it was. but the other side was duly decorated with its owner's name and many a free fight averted in this way.

But when one has an automobile to glide about in and nothing on earth to do but seek pleasure, it alters the case decidedly. Now, don't it? One of the first girls in town who had a basket fitted to her nifty runabout was Miss Alice Hager, who, by the way, always has everything that is worth a bean. She sees it, longs for it a moment and it is hers. Of course, there are baskets and baskets. That is, all sizes and fitted up in various wares and ways, but there is just one that boasts of a table. For a jolly spin of just two— one of those little impromptu affairs where a chaperon is distinctly and decidedly in the way— nothing could be more convenient than a small  ‘automobile,” yet sufficiently commodious to suffice - for two hungry campers. The lid carries two spoons— although one has been known to do— two knives, two forks and a matchbox. In the very center of the basket there is a spirit stove and kettle and just behind it a white tray, two plates and two saucers.

In one corner there is a fair sized bottle for milk or wine, a flask of alcohol and a couple of cups. Just opposite are three tin compartments, one for bread or biscuits, another for fried chicken, while the other serves admirably for potato chips or any of the little nothings that go such a long way toward the making of a dainty luncheon. For people like the Crockers, the Schwerins and the Martins, who spend most of their time at Blingum, the basket for four is much more used, and its filling has been reduced to a science. “Hello. Private Exchange 1, This is the Hobarts’ place. Fill that ‘automobile’ for four and send it on the five train. Yes, a regular lunch. Make it a good one. Good-bye.” And that’s the art of picnic concocting. San Rafael isn't far enough away to have been left out, and there are a multitude of haunts that must have been made for this precise reason.

Of all her enthusiastic devotees, Mrs. Charles K. Harley probably holds the palm, for there is scarcely a week that Miss Julia de Laveaga and Miss Ruth Gedney fail to trip over, bound for the woods. In runabouts and on sturdy cobs, the cavalcade journeys to the allotted spot and a lazy peaceful day is before them. In less than two and a half minutes a feast fit to set before the king is yours for the asking, so is it any wonder that outings are distinctly the order of the day.  The only wonder is that folks were so slow in finding out how much fun they were missing, but just now to be executing the proper caper, you and your friends really must make up for lost time. – San Francisco Call, 1903

Etiquette Enthusiast, Maura J Graber, is the Site Editor for the Etiquipedia© Etiquette Encyclopedia
Posted by Etiquipedia at 9:40 PM