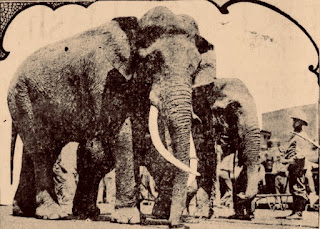 Ethics and truth in advertising? They flew out the door when a circus rolled into town. “Advance men” would ramp up the hype, weeks before a circus would arrive in a new area. Bluster, outright lying, and of course, bragging, was common among the world of circuses, and the exotic animals were a huge draw for audiences that would never have a chance to see such animals otherwise. These animals, regardless of the outlandish claims, made circuses the biggest and most profitable form of entertainment of the 19th century. By1865, P.T. Barnum was the biggest promoter of individual attractions the world had ever known. This portion of a 1921 advertorial promoted the recent acquisition of “Tusko” by the the Al G. Barnes circus. (Note– the average age of elephants is 20 to 40 years, the oldest elephant known was 86 years old.) – “‘Tusko’ is 12 feet 5 inches high, which is 11 inches taller than was ‘Jumbo’... Just how old ‘Tusko’ is cannot be definitely stated, but Al G. Barnes estimates that he is between 70 and 90 years of age. Barring accidents he should attain the ripe old age of 1150, as he is in perfect condition.” In reality,“Tusko” was born in 1892 and died at the age of 41 in 1933. –1921, Morning Press

Advance men coming to Santa Barbara in the interests of the Al G. Barnes circus still are talking about the time when the Barnes and the Sells-Floto circuses showed, in the argot of the circus, “day and date” in Oskosh, Wis., last summer. There were two street parades in the morning and the rival circus “lots” were directly across the street from each other. Although the rival managements had been having each other's bill posters arrested for “stealing” billboard space, circus etiquette demanded that each manager should invite his rival to be his guest at the afternoon performance.

Just how the question of which should play host and which guest was decided has not been made clear, but the Barnes version is that the Sells-Floto management were guests and while their own circus was playing to half a house, the management had to sit on pop cases to witness the Barnes performance, because all of the reserved seats were filled. The Barnes people among themselves refer to their show as the “cat opera,” the John Robinson circus to them is the “John Hog Show," the Ringling Brothers are habitually referred to as the “Ding Dong Sisters,” while the Gentry dog and pony show is known as the “Fido.” – The Morning Press, 1921