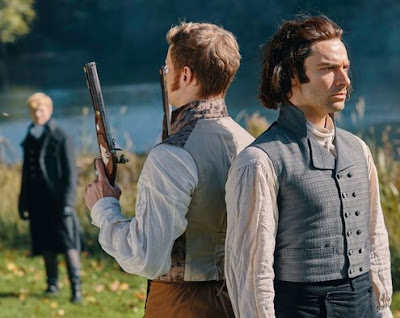 “Prior to its demise a ‘Royal Code of Honor’ existed and was adhered to by dueling Principals and Seconds. The code stated, ‘No duel can be considered justifiable, which can be declined with honor, therefore, an appeal to arms should always be the last resource.’” according to historian, Geri Walton – Dueling is said to have thrived for nearly three hundred years, but it’s believed the practice ended in 1852, the year of the last recorded English duel. Dueling was outlawed in France in the 17th century, but it stopped very few men. It's estimated that between 1685 and 1716, French officers alone, fought in as many as 10,000 duels, which led to over 400 deaths. Dueling in the US was not uncommon in the West and South, even after 1859, when 18 states had outlawed the practice, but it became a thing of the past in the United States by the early 1900’s.


The much-talked-of duel between Prince Henry of Orleans and the Count of Turin was fought in Paris at 5 o'clock yesterday morning. It is of little interest to Americans whether the Frenchman or the Italian was the victor in this combat, but it shows conclusively that the matter was a more serious affair than the comments of the English press would imply.

The usual mode of dueling in France, which consists of using sharp-pointed florettes on which buttons are attached one and a half inches from the point, was entirely set aside and rapiers were used instead. Rapier and saber duels are considered in Europe, fully as dangerous as pistol duels, and it cannot, therefore, be said that this affair was anything but a mortal combat.

According to the Code of Honor acknowledged in all Continental armies, no officer of one array is allowed to say anything to a representative of the press detrimental to the honor of another army. Prince Henry, when making his famous criticism of the Italian army in Abyssinia, knew full well that he was committing a breach of etiquette which could not result in anything but a challenge from a representative from the insulted army.

The Italian honor having thus been vindicated, the little episo will be talked of for a few days in France and Italy, and then be entirely forgotten. That any international or even diplomatic controversy should arise from this affair is entirely out of the question, even if Prince Henry should be so unfortunate as to pay with his life for his indiscretion. – San Francisco Call, 1897

Etiquette Enthusiast, Maura J. Graber, is the Site Editor for the Etiquipedia© Etiquette Encyclopedia
Posted by Etiquipedia at 2:41 AM