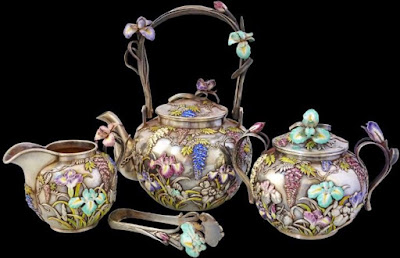 Hosting afternoon teas was one of the social duties of Congressmen and their families. Life could be exceedingly onerous for Congressional wives in the Victorian era Washington social scene –“It is optional with Senators and Representatives, as with all officers except the President and members of the Cabinet, whether they shall ‘entertain.’ There is a vast expense in all this, but that is not all. The labor and fatigue which society imposes upon the ladies of the family of a Cabinet officer are fairly appalling. To stand for hours during receptions at her own house, to stand at a series of entertainments at the houses of others whose invitations courtesy requires should be accepted, and to return in person all the calls made upon her, are a few of the duties of the wife of a high official. It is doubtful if her husband, with the cares of state, leads so really laborious a life. In Washington society one end of a card turned down denotes a call in person.” –E.B. Duffy

House Speaker and Mrs. Henderson have precipitated another squabble in connection with social precedence at Washington and not a few old-fashioned citizens there are once more unwilling listeners to discussion of what the ultra-fashionables regard as an important issue. Rules of society etiquette at the capital, as interpreted by those who take a deep interest in such matters, provide that the Speaker must not be invited to meet other members of the House. Therefore, he and Mrs. Henderson have refused several invitations to dinner where another was to be the honored guest, and as a result there is quite a tempest in the social teapot. – Los Angeles Herald, 1900

Etiquette Enthusiast, Maura J. Graber, is the Site Editor for the Etiquipedia© Etiquette Encyclopedia
Posted by Etiquipedia at 12:23 AM