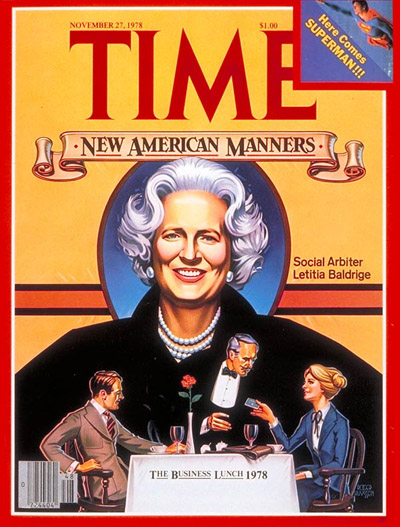 Known as the ‘doyenne of decorum’ and as a social secretary to American First Lady, Jacqueline Kennedy, Letitia Baldrige was one of the chief arbiters of good manners in modern America. Described in a 1978 Time Magazine profile as a “superbly energetic amalgam of feminist and Tasteful Lady.” Baldrige embarked on a career that took her from diplomatic cirlcles, to the White House and on to a long career advising business executives on the finer points of etiquette and social graces, all starting decades before women talked about “having it all,” and at a time when many of her female colleagues were afforded few professional opportunities. She authored numerous books and articles on etiquette and social graces over her long career. “Discourtesy and arrogance were not requirements for a career of similar accomplishment,” she would later advise executives in her role as a maven of etiquette. Baldrige died in 2012, at the age of 86.

If you ever find yourself sitting across the dinner table from Jacqueline Onassis or Robert Redford, don’t ask about a job for your n'er-do-well cousin. That’s one of the worst things you can say to a celebrity, says Letitia Baldrige, social secretary at the Kennedy White House, in the new edition of "The Amy Vanderbilt Complete Book of Etiquette" (Doubleday).

Here’s more advice from Baldrige on keeping your foot out of your mouth in such situations:


Etiquette and Manners Have Differences

NEW YORK (AP) Could you differentiate between “etiquette” and “manners”? Letitia Baldrige in her revised book on etiquette says, "Etiquette has to do with when you wear white gloves and how to unfold a napkin on your lap.

Real manners are being thoughtful toward others and doing nice things for others. “Manners really matter, they stem from kindness. Etiquette can be a bit starchy,” she said. – The Desert Sun, 1981

Etiquette Enthusiast, Maura J Graber, is the Site Editor for the Etiquipedia© Etiquette Encyclopedia
Posted by Etiquipedia at 3:43 AM