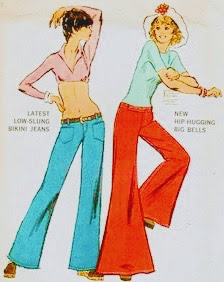 Proper court attire is surprisingly still rather “conservative” in this day and age. It was even more so 53 years ago, when “hip-hugger” bell bottom pants were just becoming trendy. An attorney can give the court dress etiquette one should follow. A quick search online found the following, along with tips including that of getting a haircut: “The judge, jury and everyone else in the courtroom will take notice of how you choose to present yourself to the court. You want to show that (a) you respect the courtroom and (b) that you are taking the matter seriously. Whether it is as simple as a contested traffic ticket or more complicated like a medical malpractice case, it is important to dress appropriately for court.” – from CohenJaffe.com, photo source Pinterest

Makes Girl Get a Dress For Decree

LOS ANGELES (UPI) Superior Judge Roger A. Pfaff yesterday objected to the attire and facial contortions of a waitress from nearby Panorama City, but he granted her a divorce anyway. The judge’s ire first was raised when she appeared in court attired in yellow bell bottom, hip - hugging “pajama pants.” “I’m not a stickler on so-called decorum,” said the judge. “But I will not let anyone come into my court and, testify in a pair of pajama pants or pedal pushers. Get yourself dressed up like a lady and I’ll hear your case.”

The waitress went to a nearby store, bought a dress and returned. When she re-entered the courtroom, she apparently made a face and the judge thought she had struck out her tongue. Pfaff ordered her from the courtroom a second time, telling her attorney to “explain to her that you don’t make faces at judges.” Attorney Edwin Saul conferred with his client and explained to the judge that his client had wrinkled her nose at the thought of paying $11.47 for the dress. The judge then agreed to her case. She said her husband came home late at night. Pfaff granted the divorce. – La Habra Star, 1965

Etiquette Enthusiast, Maura J Graber, is the Site Editor for the Etiquipedia© Etiquette Encyclopedia
Posted by Etiquipedia at 1:45 AM