Etiquette and Things to Retrain From 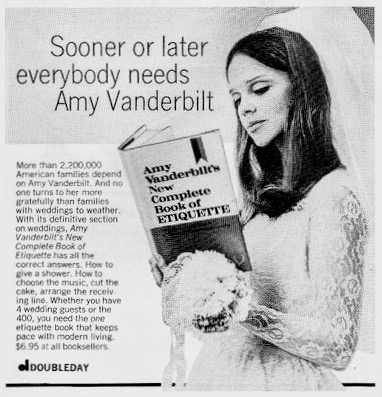 Here at Etiquipedia, we are big fans of the common sense manners which Amy Vanderbilt espoused and encouraged, through her numerous books and syndicated columns.

Rules of Etiquette That Don’t Change
By Amy Vanderbilt

As my readers know, I have a large collection of very old etiquette books and keep adding to it during the course of my travels in this country and abroad. Just recently in Ireland I was given a copy of an English etiquette book that, although undated, seems to have been published about 1902. It is called “Etiquette for Women.” One section lists “Things to Retrain From.” I was interested to see how well most of these rules stand up and are today good American manners, too.

Here they are, just as they appeared in that old book I brought back from Dublin:

My friend and fellow columnist, Mrs. Walter Ferguson, wrote recently that this is an age of vulgarity. Many of these old, sound rules of good manners are as important today as they have ever been. Are we properly teaching them to our children? Are we occasionally breaching them ourselves? — Amy Vanderbilt, 1959

Etiquette Enthusiast, Maura J. Graber, is the Site Editor for the Etiquipedia© Etiquette Encyclopedia
Posted by Etiquipedia at 10:55 PM