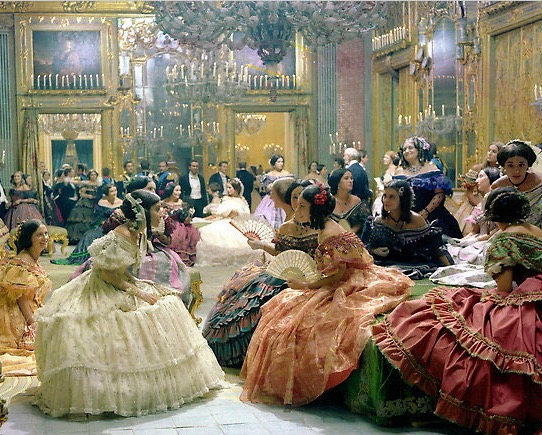 To the stranger in Italian society, a fashionable ball in this city of beauty and art presents many phases of social etiquette, at once novel and picturesque. The invitation consists of an ordinary card with “At Home” written or printed in one corner, with the hour, probably 9 or 10 o'clock.
— photo source, Pinterest

Habits and Manners of Florentine Ladies of Fashion

To the stranger in Italian society, a fashionable ball in this city of beauty and art presents many phases of social etiquette, at once novel and picturesque. The invitation consists of an ordinary card with “At Home” written or printed in one corner, with the hour, probably 9 or 10 o'clock. On the guest's arrival, even as late as 11 o'clock he is handed “No. 2,” for his carriage. Ladies and gentlemen are alike ushered into a great hall or ante-chamber, sometimes on the ground floor, sometimes on the first, and are waited on by the same attendants, and the fleecy delicate wraps of ladies are arranged beside the rougher garments of the sterner sex.

There is seldom a mirror before which a belle can pose and exasperate her escort by detaining him in the draughts of the corridor, to take the chances of catching a severe cold. Next, ascent is made by an immensely wide, carpeted stairway, bordered on either side by a wall of blooming azalea and japonica trees, such as are only seen elsewhere at the great balls in Paris, to the drawing-room door, where the host and hostess are always in waiting to welcome their guests, who, on being received, pass along to explore the line of brilliantly lighted salons before the crowd fills them, or seat themselves in a feminine row against the wall, to observe and criticise the guests us they arrive.

Ices, syrups, cakes, and tea and sandwiches are dispensed from a table or buffet in the dining-room until supper is served, by a throng of gaily liveried lackeys, and refreshments are never expected to be furnished beyond the dining-room door. A bottle of champagne is placed at each plate, as was the custom at the Tuileries, at those grand entertainments given by Napoleon III. A smoking-room is open the entire evening, and as much frequented by ladies as gentlemen.

When I first saw this, it nearly took my breath away; I don't mean the smoke, which was dense, however; but I was appalled at a custom that has become too familiar in Europe to create surprise, except among strangers. One English lady of high social rank even brought her cigarette out into the drawing-room, aud puffed away among the dancers, entirely at ease and exciting no comment whatever. After the supper and during cotillion, refreshments are passed around and partaken of freely, and at 8 or later in the morning, a hot breakfast refreshes the guests, whose carriages have been ordered at 10, or in some cases, not until noon.— Florence Letter to the New York Tribune, 1881

Etiquette Enthusiast, Maura J Graber, is the Site Editor for the Etiquipedia© Etiquette Encyclopedia
Posted by Etiquipedia at 2:26 AM