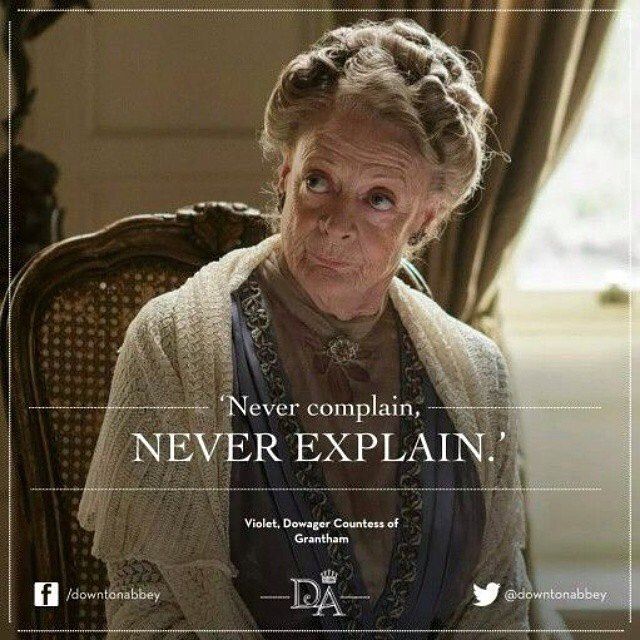 Never complain, never explain... If ever there was a Dame Grundy in period dramas, it was Violet, the Dowager Countess of Downton Abbey.
———— ———— ————
“When you are the person invited, do not gush over your acceptances or your regrets, but make your replies brief, and simple with complete avoidance of explanations as to why you can not—explanations of any sort now being considered extremely bad form.”
— Meme source, Pinterest

For School Girls of Dame Grundy

Perfecting one’s self in the rules of etiquette is a continuous occupation of a most interesting kind, for though the fundamental principles never change, there is a constant change in minor matters due to the fads and fancies of Madam Grundy. And not to keep abreast of the caprices of that autocratic lady, is to be behind the times, indeed.

Madam Grundy this season frowns upon the exhibition of excessivity in any form, and so it is not the fashion now to gush, though it wasn’t too long ago that gushing people were thought most attractive. But the proper tone of today is to have a manner which is cordial and sincere, but distinctly quiet, and this requires considerable drilling to attain.

When you invite your friends to do anything, show the sincerity of your desire to have them accept by a manner which is warm but not urgent. If they accept quietly show your pleasure, but if they decline or if they show an uncertainty, do not be insistent or try to tease them into doing what may be quite impossible. And, on the other hand, when you are the person invited, do not gush over your acceptances or your regrets, but make your replies brief, and simple with complete avoidance of explanations as to why you can not—explanations of any sort now being considered extremely bad form.

So much embarrassment would be eliminated if girls would strive unceasingly to acquire the tone of moderation now in vogue, for everyone has experienced the awkwardness of being gushingly urged to say, “yes” when one has said, “no,” and being expected to give reasons for declining when often the reasons were quite too personal to give.

At the table, it is a marked evidence of good breeding not to urge food upon a guest. It is an unwritten law of hospitality that what is yours is your guest’s, and this pertains to all matters, but it transcends good taste when you are over solicitous about the things they do or do not eat. It is of course your duty as hostess to see that things are properly served to your guests, but having offered, make no comment on what they do. Some persons are small eaters, others are large, some like everything, and others like only a few things, but all are sensitive to remarks and object to having attention called to their idiosyncrasies.

If you are on intimate terms with your hostess and the occasion is an informal one, since it is quite proper for you to make comments of a personal character, such as praising the good things she has to eat, or the decorations for a party, or expressing your appreciation of the good time she has given you. But do not employ all the expletives in your vocabulary in doing so, for such, excessive effusion is artificial and condemned, as all artificiality is on the score of insincerty and bad taste.

On occasions of a formal character, it is not good form to make personal remarks of any sort in regard to the matters pertaining to your entertainment. Though there may be some particular dish at the table which is a favorite of yours, you should not comment on the fact, nor should you ask to have it passed to you a second time. At a dinner or at a luncheon the idea is that you are in the hands of your hostess, and your cue is to follow her lead, on no account asserting yourself or taking the initiative in any way.

When things are arranged in courses, there is no question of a second serving, but when the meal is less formal it is customary to have everything passed twice except the soup, and it is quite proper for you to take things a second time they are offered, if you desire to do so. When you are hostess, never stop eating until every one of your guests has finished, for etiquette requires you to save your guest the embarrassment of making herself conspicuous by being the last. And when you arc the guest, do not thoughtlessly dally with your food in a dilatory fashion, for this is not only bad form, but selfish, as you cause not only your hostess, but the others to wait for you.— San Francisco Call, 1909

Etiquette Enthusiast, Maura J Graber , is the Site Editor for the Etiquipedia© Etiquette Encyclopedia
Posted by Etiquipedia at 11:53 PM