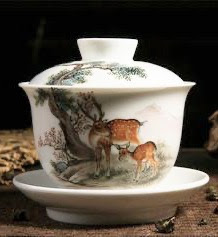 How the Chinese Man Drinks Tea


The Chinese man, in preparing tea, places a pinch of leaves in a Chinese teacup, which is without a handle, pours boiling water over them and places the cover on the cup. In a few seconds the tea is ready for drinking; the covered cup is raised to the mouth, and, with the fingers of the hand holding the cup, the lid is moved just sufficiently to permit the liquid to flow into the mouth as the cup is tilted. — By United States, Bureau of Foreign and Domestic Commerce, 1919

Etiquette Enthusiast, Maura J Graber, is the Site Editor for the Etiquipedia© Etiquette Encyclopedia
Posted by Etiquipedia at 3:44 AM