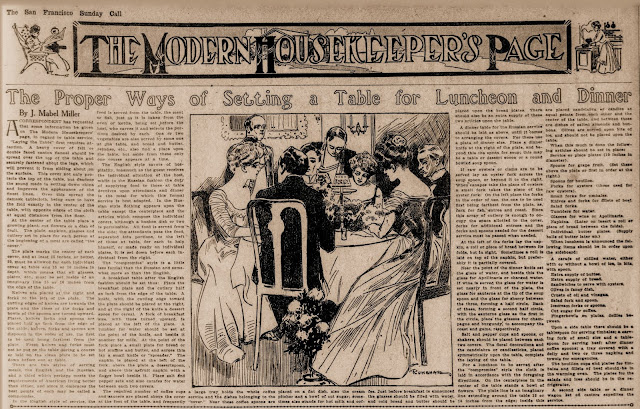 The Proper Ways of Setting a Table for Luncheon and Dinner

My correspondent has requested that some information be given in The Modern Housekeepers page, in regard to table service. “Laying the Table” first requires attention. A heavy cover of felt or double faced canton flannel should be spread over the top of the table and securely fastened about the legs, which will prevent it from sliding about on the surface. This cover not only protects the top of the table, but deadens the sound made in setting down china and improves the appearance of the finest linen. Over this, spread the damask tablecloth, being sure to have the fold exactly in the center of the table, with opposite edges of the cloth at equal distances from the floor. At the center of the table place a growing plant, cut flowers or a dish of fruit.

The plate, napkins, glasses and cutlery set in place for each person at the beginning of a meal are called “the cover.” The plate marks the center of each cover, and at least 25 inches, or better, 50 inches must be allowed for each individual cover at table and 15 or 16 inches in depth, which means that all glasses, plates, etc..., must be inside of an imaginary line, 15 or 16 inches from the edge or the table. Knives are placed at the right and forks to the left of the plate. The cutting edges of knives are towards the plate and the tines of the forks and bowls of the spoons are turned upward. Plates, knives forks and spoons are placed half an inch from the edge of the table; knives, forks and spoons are disposed in the order of use, the first to be used being farthest from the plate. Fresh knives and forks must not be put on the table during a course or laid on the clean plate to be set down before one at table.

There are two styles of serving meals, the English and the Russian, and a third which perhaps meets the requirements of American living better than either, and since it embraces the best points of each, may be called a compromise. In the English style of service, the food is served from the table, the meat or fish, just as it is taken from the oven or kettle, being set before the host, who carves it and selects the portions desired by each. One or two vegetables are also served by some one at the table, and bread and butter, relishes, etc... also find a place upon the table, but aside from these, only one course appears at a time.

The English style savors of hospitality, inasmuch as the guest receives the individual attention of the host, while in the Russian fashion the duty of supplying food to those at table devolves upon attendants and dinner is the meal for which this formal service is best adapted. In the Russian style, nothing appears upon the table except the centerpiece and the articles which compose the individual covers, although a bonbon dish or two is permissible. All food is served from the side; the attendants pass the food, separated into portions, to the left of those at table, for each to help himself, or made ready on individual plates. It is set down before each individual from the right. The “Compromise” style is a little less formal than the Russian and somewhat more so than the English.

A breakfast table after the English fashion should be set thus: Place the breakfast plate and the cutlery half an inch from the edge of the table. A knife, with the cutting edge toward the plate should be placed at the right, and at the right of the knife a dessert spoon for cereal. A fork of breakfast size, with tines turned upward, is placed at the left of the plate. A tumbler for water should be set at the point of the knife, and beside it another for milk. At the point of the fork, place a small plate for bread or hot muffins and butter, and across this lay a small knife or “spreader.” The napkin is placed at the left of the fork: above the plate a dessert spoon, and above this a fruit napkin with a finger bowl beside it. Place salt and pepper sets and also carafes for water between each two covers.

The required number of coffee cups and saucers are placed above the cover at the foot of the table, and frequently a large tray holds the whole coffee service and the dishes belonging to the cover. Near these coffee spoons are placed on a flat dish, also the cream pitcher and a bowl of cut sugar; sometimes, also stands for hot milk and coffee. Just before breakfast is announced the glasses should be filled with water, and cold bread; and butter should be placed upon the bread plates. There should also be an extra supply of these two articles upon the table. A dinner table for ‘the Russian service’ should be laid as above, until it comes to arranging the covers. For these use a plate of dinner size. Place a dinner knife at the right of the plate, and beyond this the spoon for soup; this may be a table or dessert spoon or a round bowled soup spoon.


If raw oysters or clams are to be served, lay an oyster fork across the soup spoon, or beyond it to the right. When canapés take the place of oysters, a small fork takes the place of the oyster fork. On the left place the forks in the order of use, the one to be used ; first being farthest from the plate, as, fork for fish, next for entree and roast. Since this array of cutlery is enough to occupy the space allotted to the cover. Forks for additional entrees and the forks and spoons needed for the dessert service must be passed when needed.

At the left of the forks lay the napkin, a roll or piece of bread between its folds, but in sight. Sometimes a roll is laid on top of the napkin, but preferably it is partially covered. Near the point of the dinner knife, set the glass of water, and beside this the glass for Apolllnaris or charged water. If wine is served the glass for water is set nearly in front of the plate, the glass for sauterne at the tip of the soup spoon and the glass for sherry between the three, forming a half circle. Back of these, forming a second half circle, with the sauterne glass as the first in the circle, place the glasses for champagne, and burgundy to accompany the roast and game, respectively. Salt and pepper cups and spoons, or shakers; should be placed between each two covers. The floral decorations and the candelabra or candlesticks, placed symmetrically upon the table, complete the laying of the table.

For a luncheon to be served after the “compromise” style the cloth is laid in accordance with the foregoing directions. On the centerpiece in the center of the table stands a bowl of flowers. The plate line is an imaginary line extending around the table 15 or 16 inches from the edge; inside this are placed candelabra or candles at equal points from each other and the center of the table, und between these are dishes of salted almonds and bonbons. Olives are served upon bits of ice, and should not be placed upon the table. When this much is done the following articles should be set in place: Service or place plates (10 inches in diameter). Spoons for grapefruit. (Set these above the plate or first in order at the right.) Spoons for bouillon. Forks for oysters (those used for raw oysters). Small forks for timbales. Knives and forks for fillets of beef. Salad forks. Tumblers for water. Glasses for wine or Apollinaris.  Napkins. (Later on insert a roll or piece of bread between the folds). Individual butter plates. (Supply balls of butter later on.)

When luncheon is announced, the following items should be in order upon the side board: A carafe of chilled water, serve with or without a bowl of ice, in bits, with spoon. Extra, supply of butter. Extra supply of bread. Sandwiches to serve with oysters. Olives in fancy dish. Cruets of oil and vinegar. Salad fork and spoon. Ice cream forks or spoons. Cut sugar for coffee. Finger bowls on plates, doilies between. Upon a side table there should be a tablespoon for serving timbales; a carving fork of small size and a tablespoon for serving beef; after dinner coffee spoons: a tray covered with a doily and two or three napkins and towels for emergencies. The bouillon cups and plates for timbales and fillets of beef should be in the warming oven. The plates for the salads and ices should be in the refrigerator. A second side table or a dinner wagon set on casters expedites the service.— J. Mabel Miller, 1909

Etiquette Enthusiast, Maura J Graber, is the Site Editor for the Etiquipedia© Etiquette Encyclopedia
Posted by Etiquipedia at 6:26 PM