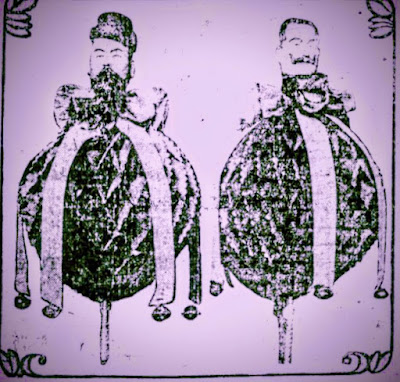 “These are the latest cotillion favors sent over from Paris. As you will see, Royalty has been beheaded to please French and American pleasure loving people. The favors are made of paper cut in fanciful designs with papier-mâché heads, respectively of the Emperor of Germany and the Czar of Russia, surmounting the base. The wand-like handles are made of wood round with pretty colored ribbons finished with long streamers and loops.”
——————————————————
Just 18 years earlier, and 4 years prior to the start of WWI, the popular cotillion favors fad of 1910 made news, due to their unusual nature. They were ribboned  wands with the heads of Royals atop them. By 1928, both men were gone from their once powerful thrones, due to the war and the subsequent Russian Revolution, and nostalgia brought back the cotillion dances of a bygone era.


Back to Old Dances

Washington — Turning completely away from the jazz of recent years, Washington society this winter will revive the stately, old-fashioned cotillion as quite the latest and most correct thing in dancing. Debutantes who figure largely on the season’s calendar are eagerly planning lengthened frocks of frills and furbelows to match the dignified figures of the cotillion.

They are consulting hair dressers concerning false knots of curls to attach to their bobbed locks. Invitations for the first of the affairs to be given at the Mayflower Hotel, December 10th, by the Washington Bachelors are already out. The list of the committee in charge is thickly sprinkled with honorables and generals and commanders.

All sorts of novel stunts and favors are being planned. There will be two orchestras, one imported from New York. Favors, by which the men will find their partners, will eclipse anything seen in Washington for many a day. The older members of the Bachelors’ club who are versed in the ceremonious etiquette of a former day, when society shone in stately splendor instead of scintillating jazz, will lead the younger generation through the figures of the cotillion.

Not alone the cotillions, but the fact that many of the season’s debutantes will emerge into the social limelight with not only one coming-out party, but two, makes this season unique. Heretofore, one tea or one ball was deemed sufficient to give Miss Debbie her due, but now many of the younger set are demanding both. — Coronado Eagle and Journal, 1928

Etiquette Enthusiast, Maura J Graber , is the Site Editor for the Etiquipedia© Etiquette Encyclopedia
Posted by Etiquipedia at 1:25 AM