The Rewards of Etiquette

Society is a game which all men play. "Etiquette" is the name given the rules of the game.  If you play it well, you win.  If you play it ill, you lose.  The prize is a certain sort of happiness without which no human being is ever quite satisfied. 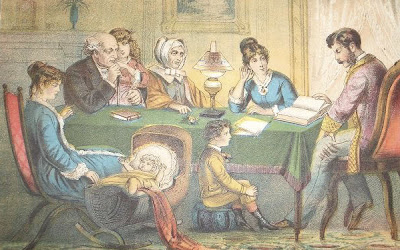 Because the demand for social happiness is thus fundamental in human nature, the game has to be played quite seriously. If played seriously, it is perforce successful, even when the outward signs of triumph are lacking. Played seriously, it becomes a worthy part of the great enterprise of noble living, the science of which is called "Ethics." Therefore the best etiquette is that which is based upon the fundamental principles of ethics. 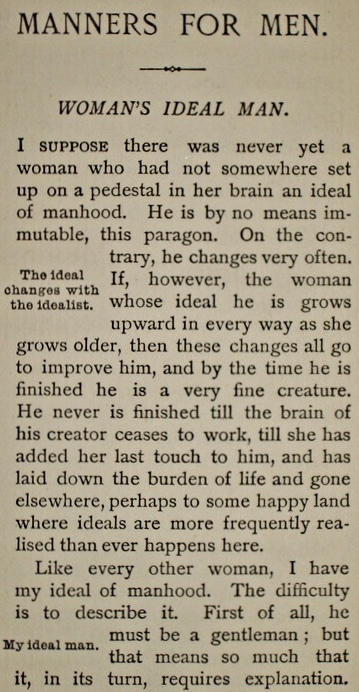 The etiquette, as well as the ethics, of to-day may well be summed up in the one maxim known as the "Golden Rule": "Do unto others as you would that others should do unto you." Or in the philosophic statement of it, given by Kant: "Act so that the maxim of thy conduct shall be fit to be universal law." A certain social sense is, therefore, the foundation upon which all concerted action rests; and this, permeating the character and winning conformity in the life, produces a social order which is at once the criterion of civilization and the source of its power.

Every social code presupposes the trained personality, that is, the individual who is intelligent enough and controlled enough to conform to the rules prescribed for the good of all. It is only in the common good that true individual good can be found. Therefore is it so essential that every man regard his brother's welfare as anxiously as his own, and permit himself to be curbed in his extravagances, limited in the indulgence of even legitimate desires, in order that he may not defraud another, or menace the general well-being. Not only in social life, but in business, politics, and international relations, this principle of the common good as the ultimate goal, the supreme authority for conduct, holds good. To it society approaches, now by direct progress and now by seeming reaction, but ever with a higher evaluation of justice. 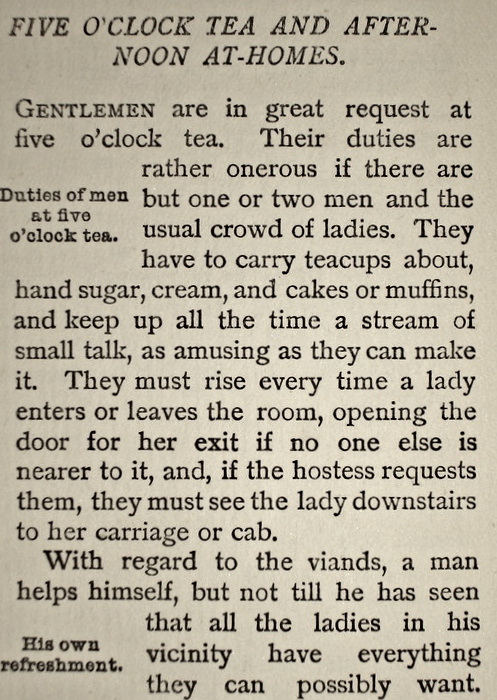 This is shown in the fulfillment of both small and large obligations. Following the rules of courtesy, men give to each other that deference which each believes is his own due, and each receives in return twofold the deference that he sincerely gives. Men show, at home and abroad, the courtesy to women in general that they would wish shown to those of their family, and thereby the standard of respect for woman is so lifted that even the city street at night is a safe place for a woman to pass unaccosted, if it is necessary for her to go unattended. 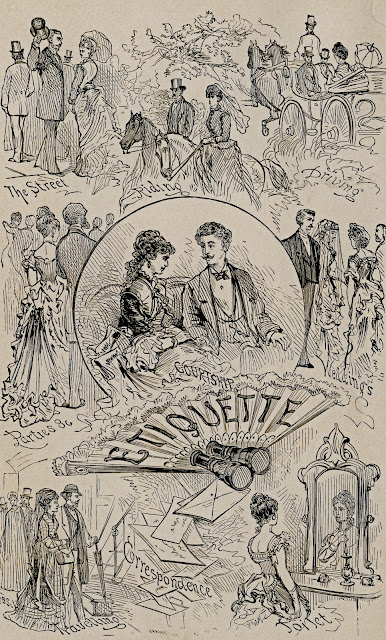 Rigidly do we hold ourselves to the established rules of good breeding, endeavoring to make of ourselves all that Nature will permit; and we are surprised to find that Nature's own gentlemen and gentlewomen gather about us, and rare souls look to us for companionship, as finding in us kindred spirits. No field so surely bears a like harvest as the one sown with the seeds of good-will and consideration for others.


Etiquette tells us how to accomplish what we desire,—to make clear the path to the goal of high companionship with many worthy minds,—and enables us to get out of social intercourse the honey that is hidden there. Without it, as social beings, we should be as workmen without tools, architects without material, musicians without instruments. After all, however, etiquette is only a tool, and should never be mistaken for the finished work itself.


How you carry yourself at a reception is not a matter of so great moment, as is the fact that you went, and there exchanged certain worth-while thoughts with certain people. It is the people, the thoughts they gave you and you gave them, and the practical influence on your life of those people and those thoughts, which are of moment. Just as, from a musicale, you must carry the music away in your soul, either in definite memories or in a refreshed and more joyous frame of mind, or it is of no avail that you attended, so from social intercourse it is absolutely necessary that you carry away the inspiration of meeting others and the thoughts that they have given you, and garner from those help and guidance in your life, or the most elaborate of toilets, the most perfect of manners, and the most ceremonious of customs are of little worth. The tool, however, becomes invaluable when the master desires to create. 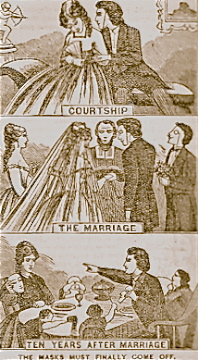 Therefore, if we wish to gain from social life the enjoyment and happiness and help which it should yield, we should become familiar with the practice of the best forms of etiquette, so that we shall have skill and aptitude in their application. The rewards of etiquette are, therefore, both spiritual and material. That fine poise of soul which restrains all selfish and unlovely tendencies, that clear insight which sees the individual as but a single unit in the composite of the human race, that high aspiration which culls only the best from the mingled elements of life,—all these come from a true and sincere adherence to the spirit of courteous observances, and each of these is its own reward.


On the other hand, human hearts open only to gentle influences, and all that it is in the power of human beings to bestow upon one another comes most readily and most lavishly to those who outrage no social instinct. To be highly and sincerely honored socially means to be well loved, and that must mean to be lovable. Wealth and family position are matters of chance as far as the individual is concerned, but good breeding is a matter of personal desire and effort. It makes for power and influence, and often literally commands the wealth and position which the accident of birth has refused. It is the necessary colleague of intellectual ability in winning the farthest heights of success, and makes the plains of mediocre attainment habitable and pleasant.~ From Edith B. Ordway's "The Etiquette of To-Day," 1918

Posted by Etiquipedia at 6:15 PM