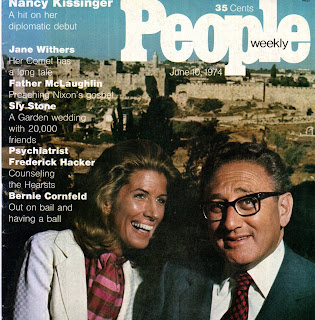 The U.S.’s only foreign-born Secretary of State, Henry Kissinger served (1973-77) under Presidents Nixon and Ford. After 4 influential years as special adviser on national security affairs, when he became Secretary of State, Kissinger pioneered the art of “Shuttle Diplomacy,” traveling hundreds of thousands of miles, in search of peace. Of his wife, Nancy, on their Middle East trip, 1974’s People magazine said, “Throughout the mission she behaved as if her role as tireless, inquisitive, unfailingly courteous tourist could actually help the peace negotiations. She visited the souk or old market in Damascus, chatted with an Israeli soldier wounded in the Yom Kippur War, and conversed in animated, fluent French with a Franciscan archeologist at the site of the Capernaum synagogue on the Sea of Galilee, where Jesus began his teachings. As the protracted diplomatic maneuvering neared its close, Nancy Kissinger drew the kind of accolade missing in U.S. diplomacy since the Kennedy years. “More people here,” Premier Golda Meir said in her farewell toast, “now talk about Nancy than Doc.”

Etiquette Enthusiast, Maura J. Graber, is the Site Editor for the Etiquipedia© Etiquette Encyclopedia
Posted by Etiquipedia at 2:01 AM