Of Etiquette, Bolsheviks and Satire 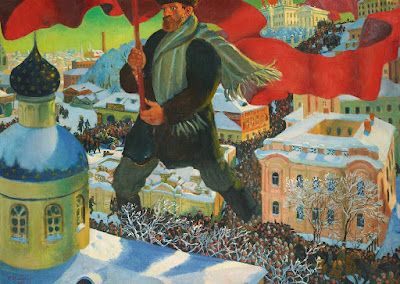 The Bolshevik, by Boris Kustodiev
– Bolsheviks, or Reds, came to power in Russia during the October Revolution phase of the Russian Revolution of 1917 and founded the Russian Soviet Federative Socialist Republic. The Bolsheviks, founded by Vladimir Lenin and Alexander Bogdanov, were by 1905 a major organization consisting primarily of workers under a democratic internal hierarchy governed by the principle of democratic centralism, who considered themselves the leaders of the revolutionary working class of Russia. Their beliefs and practices were often referred to as Bolshevism. 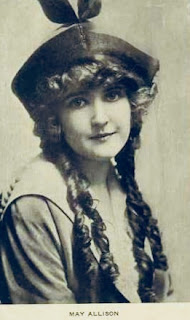 Silent screen star May Allison, star of  1919’s “Uplifters, the Free,” played Hortense Troutt. In the film, Hortense attends a "Bull-Shevik" lecture and is won over to the Bolshevik cause. The next day she quits her stenographer’s job working for a capitalist. She finds the woman who gave the lecture and offers her services. The woman promptly puts her new comrade to work as a maid. The work, without pay, of course, becomes harder by the day, and in what short amounts of spare time she has, she is expected to type speeches. Romanced by an older "Bull-Shevik," Hortense has to give him $49.00 to buy a suit in which he can marry her. But a new convert happens along. The new convert is the son of Hortense's former boss. In love with Hortense, he’s been looking for her ever since she quit her job. When Hortense finds that her old "Bull-Shevik" suitor is married already, Hortense dumps both him and the unpaid job as a maid. She becomes a convert to the cause for capitalism and her new, honest suitor.

After participating in a Bohemian banquet in her Bolshevehicle, “Free,” May Allison decided to issue some hints on etiquette gratis to all Bolsheviks:

Posted by Etiquipedia at 2:49 AM